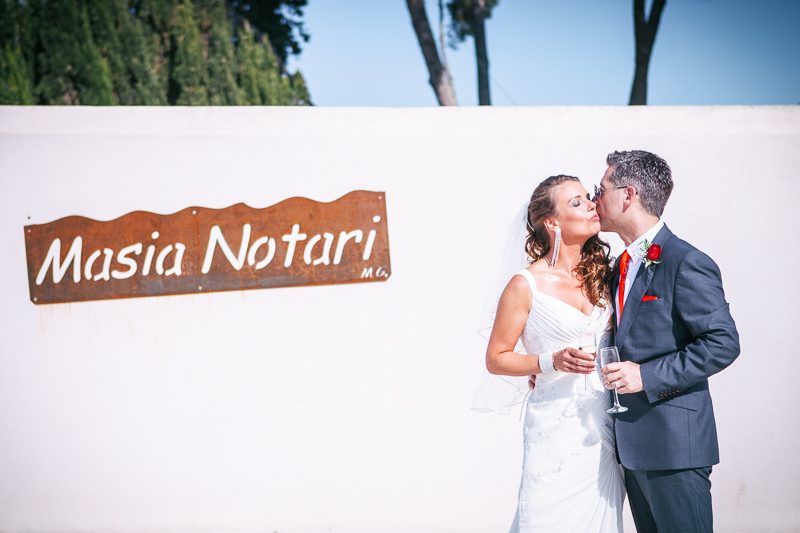 Today we head off to the wonderful city of Barcelona, Spain for the wedding of Samantha & Nick. Their day was captured by Derby based Wedding Photographer Paul Clark of Infinite Symmetry.

The wedding of Samantha and Nick was held in a quiet location just south of Barcelona. Destination weddings are something we look forward to immensely as they tend to be rather more private than your standard local wedding. Fewer guests than normal but each one is so important to the couple that the atmosphere is electric. You can literally see the emotion of each and every person there and how it’s directed intimately towards the couple. This makes for very emotional photos and its a joy to be a part of occasions like this. The weather as you will see was perfect as you would expect from the Spanish climate.

Sam and Nick are what you would call the perfect couple. So intimately in love, annoyingly good looking and with a character that you can only be immersed by and want to be a part of. They bring out the best in people and make you feel like you are as special as the next person. They have the most beautiful daughter who was arguably even more photogenic than themselves and she played up to the camera so wonderfully. They are emotional, caring and above all, a hell of a lot of fun.

The venue itself was a huge private complex enclosed by 10ft high walls. Inside was truly incredible. The hub being the pool and the kitchen area where everybody hung out for a couple of days in the lead up to the ceremony which too was held within, secluded from the outside world.

The wedding day itself was probably the most relaxed of any wedding we’ve covered before. After a late night previously spent by the pool, people woke slowly and gathered around the kitchen for what can only be described as the best breakfast I’ve ever seen. People would disappear for a while here and there and start the days preparations and then pop up an hour later half dressed with a air of content about them. There was no stress, no wondering if somebody would be late, if the food would be ready or if the car would arrive on time. Everything they needed was already there and had been for 2 days. This gave the day a gentle flow, a sense that it will start when it starts and thats all that matters. The morning was mainly taken up by the guests all helping out putting up decorations, setting out the chairs and doing each others ties and filling up each others glasses. And when the time came that all was done, the ceremony began.

Everything that was needed for the day, catering, music, a registrar, even a photographer! was flown over from the UK. The only thing Spanish was the beer and the cake (which was made by an english lady living in the local area) This wasn’t to deny all things Spanish, it was simply to keep things as close to their heart as possible, while spending a few days with their closest friends and family in a truly wonderful location.

After the ceremony, the party lounged by the pool enjoying each others company and revelling in Sam and Nick’s new beginnings. During this time, we snuck off outside the complex into the abandoned streets of the village to capture to quiet unique photos of the newly married couple. The locations for these photos were quite different to what we’re used to but we used it to our advantage to capture some unique photos that we may possibly never be able to recreate again. The favourite of ours being the graffiti’d walls which we used as a background. These walls were actually the street side walls of the complex.

I think you have an idea now as to how the day went. It didn’t change much in regards to the atmosphere or pace. It was beautifully calm and flowing. Right from the sit down meal through to the evenings entertainment and finishing by the pool until the early hours of the morning.

The favourite part of the day for us was the morning. The time where the guests put up the decorations and prepared the entire place ready for the wedding. There was so much fun and laughter had by all and it was such a unique experience to see this happen. Instead of a venue doing all this for you, the fact that the guests and the couple did it themselves made everything that much more personal and meaningful. Oh, and id’ hate myself for leaving out little Scarlett. Without her we would never have gotten that beautiful ring shot. The most adorable person in the world.

Infinite Symmetry Photography consists of 2 friends, Paul and Chris. We have been professional photographers for the last 10 years and have been shooting weddings now for the last 6. Our photography love grew from different strands of our lives though. From living in New Zealand and being inspired by some of the worlds best landscape views to bringing up 2 children and nurturing a love of portrait photography. Ultimately done the line, these 2 approaches to photography blended together and grew into what we do today. Unlike a lot of photographers, we ALWAYS shoot together, we don’t charge extra for this, it’s just how we like to work. It not only takes the pressure of each other, allowing us to concentrate on the best possible photos, but it also allows us to be in more than one place at once, never missing the one shot that would inevitably go forgotten if unseen. It also gives the couple a little more confidence too knowing that as much of the day is being covered as possible. We have been friends for over 20 years and know each other so well that our shots blend into one another’s perfectly. We know how we both shoot and what we both look for. Its a perfect working relationship and we think this shows in the final product. Our style is very photojournalistic. We like to keep things natural and emotional. blending into a crowd is as important as not being noticed at all when you have big heavy cameras around your neck and having the ability to do this and not interfere with the day yet at the same time being at the heart of it is such an important part of what we do. It allows us to capture the real moments as they happen, as naturally as possible.