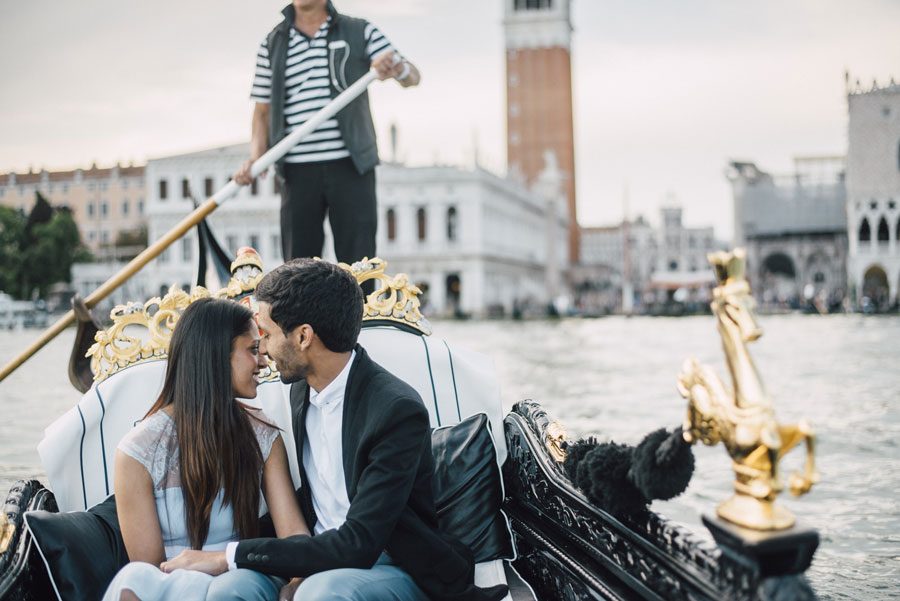 I am excited to share this beautiful engagement proposal on a gondola in the gorgeous Venice. The day was captured by wedding photographer WeddingCity Photography.

Nihal the groom said… “We met in one of the most unlikely places, but I guess it’s becoming more common now… Twitter! The weirdest part was that we had no mutual followers and yet Jes still managed to find me. She doesn’t believe it, but I keep saying it’s fate because we are made for each other… from the music we both listen to, to the fact we both love basketball (which is quite rare in England). We spoke every day for 6 months on the phone and Skype before we met in person. I already knew before we met face-to-face that I wanted to marry her, and I even told her – but she didn’t believe me! I wanted to go to Paris for New Year’s with her (this is still before we had met), and she told me that she would only go with her husband. I told her that it’s going to be me so we should go, but she paid no attention. Little did she know that nearly 3-1/2 years later we would be engaged!

I had the idea of proposing on a gondola in the canals of Venice since I was 18, but I just hadn’t found the right woman to do it for yet. Fast forward a couple of years and I met the woman of my dreams! EVERYTHING just seemed to fit with us: every single thing kept proving to me that this was meant to be and that she is my soulmate.

The Amazing Moment this Guy Proposes on a Gondola in Venice…

I was told about Flytographer by my cousin’s fiancé who used the service when he proposed in Paris, so I instantly went on the website and started looking around at the photographers in Venice. I fell in love with Serena’s portfolio almost instantly and knew that she was the photographer that I wanted to capture my proposal. I got in contact and Jen, my Flytographer Concierge, and confirmed that Serena was free on the date that I wanted to propose (success!). My only issue now was that she had to be on the gondola with us, so Jes was going to have to know about the photographer!

When I first tried to propose the idea of a holiday photographer, Jes’ reaction wasn’t quite what I wanted. She said ‘no’ because she wanted to use the selfie stick she had recently given me as a present (disaster!). We hadn’t used it yet and she thought Venice would be the perfect time to get some use out of it.

I bought Jes a new dress and a special bottle of champagne to take with us to celebrate afterwards. I had the video conference with Jen and Serena where we discussed possible routes for the gondola and where the perfect spot would be to pop the question, and even for Serena to give me a cue to know that we were in the perfect position for the moment. By the end of the video conference, I think it was safe to say I was more than excited for it even though we were still a couple of months away from the big day!

The day of the proposal we woke up and it was absolutely tipping it down with rain! Disaster had struck! I messaged Serena and asked her what she thought was the best plan, and she told me that there was going to be a 2-3 hour window where it was meant to be dry and if I really couldn’t wait till the next day then we can move the time of the shoot to fit in the dry window. Thankfully the rain cleared up sooner than expected and stayed dry for the rest of the day; the sun even came out and graced us with its presence!

I only became nervous as I stepped into the gondola, and I couldn’t really focus properly on enjoying the first half of the gondola ride. So much so that I completely missed the cue from Serena to let me know that it was time! She just nodded at me and looked at me dead in the eyes to tell me that now is the moment!

I looked at Jes in her eyes and began to tell her how the three years we have been together have been the best three years of my life and that I couldn’t ever imagine being with anyone else. I had a whole speech written out (which of course I forgot), and I told her that I can’t wait to spend the rest of my life with her and that I had a question to ask her. I reached into my blazer pocket to pull out the ring. When my hand reached inside my blazer, that’s when she realised what was about to happen!

I got on one knee in the gondola, opened the box, and asked her if she would marry me! By this point she had already started crying and hadn’t even looked at the ring yet. I had to ask her if the tears meant it was a ‘yes’ because she still hadn’t answered me. Suffice it to say, it was a yes!

I put the ring on her finger (it fit!) and sat back down next to my new fiancée. She couldn’t stop staring at the ring and I couldn’t stop staring at her, I had never seen her so happy in all the time I’d been with her so I knew I must have done something right! The rest of the gondola ride was just a blur. I remember another couple in a gondola congratulated us, and next thing I knew we’re stepping off the gondola to take some more pictures on solid ground.

The whole Flytographer experience was perfect – everything was seamless and both Jen and Serena were crazily helpful! I can’t speak enough good words about them. Serena was amazing on the day, from organizing the most beautiful gondola, to the route, to making us feel so at ease while she was snapping away, and she even bought us drinks after the shoot! She was so sweet and we’re planning to meet up with her next time she’s in London!

The best thing about it was, after all the planning and the secrecy, Jes had no idea. She was completely taken by surprise and was not expecting it at all. This was the biggest part of the proposal’s success (other than her saying yes of course)! We both absolutely love the photos and haven’t stopped showing them to practically everyone we know!We both feel that having

Flytographer there made it perfect, because now we have the most amazing photos that captured our most precious memory that we will have forever!”
Planning proposal: flytographer –http://www.flytographer.com/
Photography: Serena Genovese