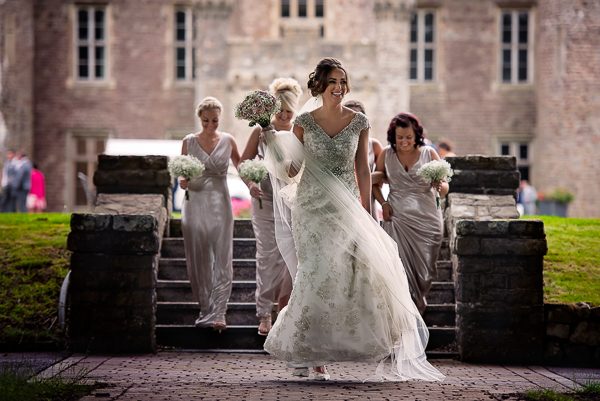 We feature the lovely wedding of Sasha and Kurt captured by Dominic Lemoine Photography.

The Couple
This is Sasha and Kurt. One loves rugby and is shy. The other has a bubbly personality and is big-hearted. Together, they make the sweetest couple ever!

The day and how it went
We started at Sasha’s parent’s where everyone was getting ready. The excitement was palpable! Soon enough, a pair of beautiful vintage vehicles arrives to pick up the family guests as well as the bride and her father. We drove to the castle, just 10 minutes away. Unroll the red carpet, everyone was waiting for that gorgeous Bentley to arrive. When it did, Sasha came out of the car, escorted by her father. Minutes later, they kissed surrounded by family and friends. Married, they left the oak panelled room laughing! Confettis, Champagne, a quick stroll around the grounds and they came back in for the wedding breakfast. The speeches were seriously hilarious. Enough to make me smile weeks later.

For music, there was the harpist, then later the 9-piece jazz band and finally a DJ and the most amazing smoke machine.

The Photographer
I’m Dominic. I’m originally from Canada and now living the Good Life in the middle of the glorious Welsh countryside. I have two children and the most wonderful wife.

How would you describe your photography style?
Natural, different and determined.

Together with my awesome assistant Becky, we capture weddings with our heart. We love natural images (and hate horribly fake ones!). To get them, we constantly try new angles, compositions and techniques. We avoid the recipes and go for something new and fresh. We don’t stop, either. Every time a guest (which is often the mum of the bride, for some reason!) asks us to sit down and relax for a minute, there’s this voice in my head that shouts “But it’s a wedding!”. No, we don’t stop. There’s never a dull moment. To us, every part of the wedding is the most important bit. We’re telling a unique story, might as well put everything we’ve got!

What did you love about the day?
I feel like saying everything! But if I had to pick just one bit, it would be the people. All of them! There was such a great mood throughout the day. Every moment was filled with a kind of ecstatic lightheartedness.