Epic Mount Everest Wedding After Trekking For 3 Weeks with their Photographer! 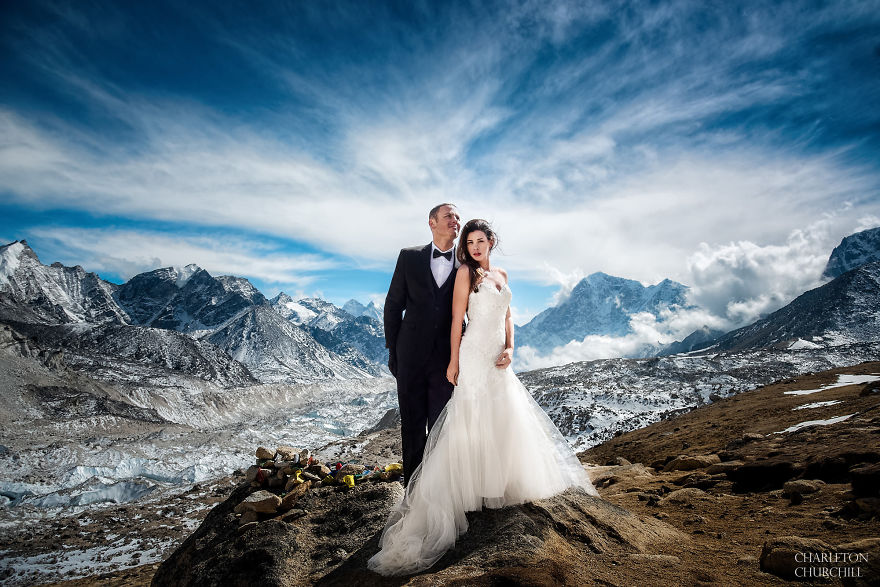 What does your dream wedding look like? In a Vera Wang dress with a long guest list and a beautiful location? Or a quieter and private with just a bunch of friends and family? Well, this couple from California seems to have broken all your dreams to have a perfect wedding by setting the ultimate wedding goals of our times. They got married on the tallest mountain ever!

Welcome to the most epic wedding of 2017, at Mount Everest!

Yes, Ashley Schmieder, 32, and James Sissom, 35 got hitched at the base camp of Mount Everest in the most epic of all weddings. Photographed by the adventure wedding photographer Charleton Churchill, their photos are breathtaking and speak volumes about their journey on the mountain.

The Pictures One Can Cherish for A Lifetime

It all started when Ashley, the bride, reached out to Chruchill over Instagram looking for an adventure wedding. The couple didn’t want a run-of-the-mill routine and was looking for something to remember for the rest of their lives. While Ashley wanted to go for something tropical, Churchill suggested her Mount Everest, and there it was, the adventure of a lifetime for the couple and the photographer.

About the Couple and the Training

Charleton Churchill had been trekking all his life, and had even been on a summit to the highest peak in North America, Alaska’s Denali, Mt. McKinley at 20,320 ft. This Mount Everest Summit though was not his first. Churchill had attempted a wedding shoot with another couple in 2015 but the earthquake of 7.8 magnitude had put a halt to their journey. His second attempt with Ashley and James, however, turned out to be the success it was hoping it to be.

However, despite a year’s worth of training, the couple had to battle serious asthma and altitude sickness to get married. The groom, James’ altitude sickness got so worse that the crew almost called off the mission, just a few feet away from the base camp and a day before their wedding. But, thanks to an oxygen treatment, the guide allowed them to go, leading to the beautiful nuptials surrounded by the mountains.

The First Couple Ever!

The first couple to ever get married in a tux and a wedding dress on Everest, it was extremely difficult for them to take pictures in the freezing weather. Under the temperature range of -8 to 10 degrees Fahrenheit, Ashley had a tough time keeping her arms warm during the shoot and decided to throw a wrap on them towards the end of it.

It was also difficult for Churchill to be without gloves for long and a lot of his camera equipment refused to work due to the low temperatures. However, their pictures look every bit of awesome with their sunglasses, beanies, dresses, and a pair of mountain shoes.

As Churchill wrote in his blog, “There’s no glory without suffering”. Despite the weather, the sickness and the lack of a minister, the couple exchanged vows and rings in the most breathtaking of settings and set an example for everyone looking for a perfect wedding out there.