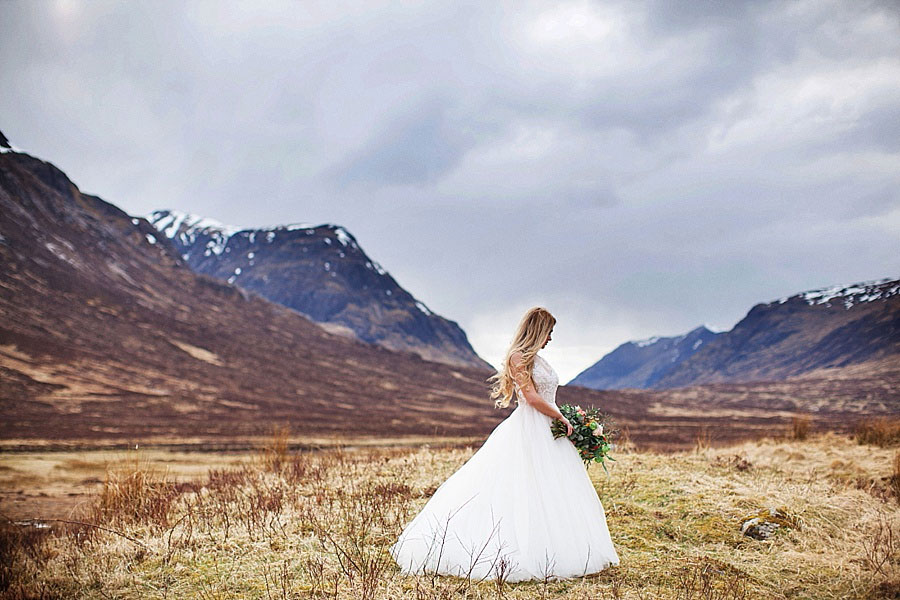 Elopements & Engagement Shoots in Scotland captured by by Roma Elizabeth Photography. The highlands feel like home to me, exploring and getting lost in the wildness and dramatic landscape. I am thrilled  to share with you a shoot that I did as inspiration for elopements and engagements in Scotland.

The shoot was held in early spring as I know Glencoes mountain would have a frosting of snow on them which makes for a beautiful back drop for the photoshoot. The theme was rugged highlands, so I aimed to keep the styling rustic with the models hair being left as natural as possible, so to move in the wind. The same for the dresses when I went to choose the gowns. I had in mind I wanted light and floaty fabrics such as tulles which have lots of movement, but still have a soft look to them. The grey gown was something I felt quite strongly would work with the location and colors, fitting in well with the grey, greens and faded blues in the landscape.

For flowers we requested an assortment of wild flowers that would sit together nicely but not look too contrived, almost like they could have just been picked and put together easily, but giving a punch of colour against the pale gowns.

The victorian ring company lent me the beautiful sapphire ring to fit in with he colour scheme of muted grey and blues and I particularly like the emerald cut as it is such a classic cut.

The shoot wasn’t without its challenges, Glencoe can be stunning in the daylight and sunshine but we wanted to capture loch rannoch as the sun started to set and the loch is like a mirror, this meant braving the cold wind and rain for a while with the slight worry that the weather may not change but we where in luck and the sun came our just as the light started to fade.

As for me, I have been described as a fairytale photographer, I adore my home of Scotland and am constantly inspired by the landscapes around me to create beautiful images. I am spoilt for choice and am lucky enough to have a good network of suppliers in the industry who like to work with me. When it comes to wedding photography I have been so lucky as I appear to have attracted couples who have the same adventurous imagination as me and want to create different and more unusual photos so are happy to try different ideas.