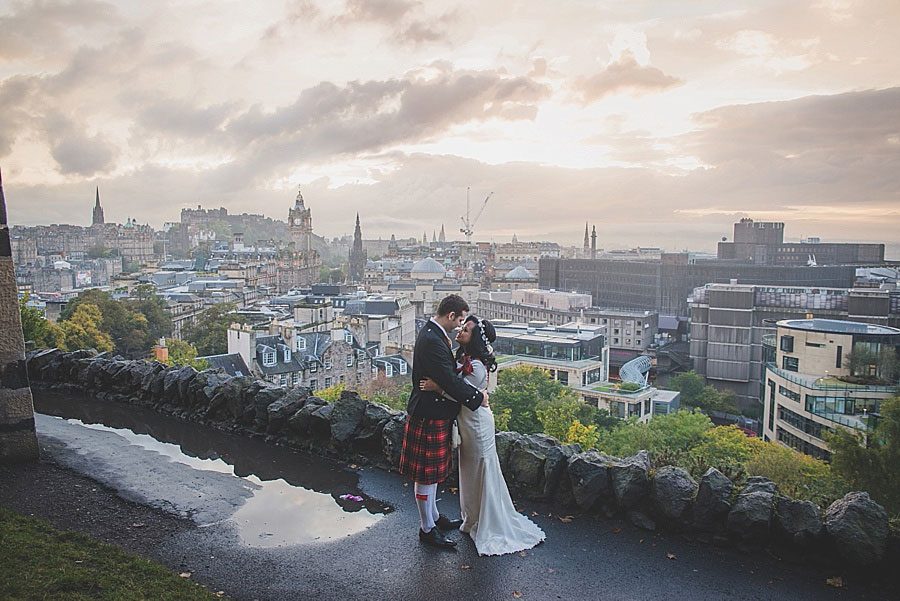 We feature a lovely Scottish wedding in Edinburgh city captured by Jacqui of Chic Photo.

The couple
Aishah first contacted me at the start of the year to say that her and Aonghus were getting married in Singapore but honeymooning in Scotland. Aonghus’s Father is Scottish so they were planning a visit to see the country and meet up with family. Aishah’s idea was to bring their wedding attire with them so they could get some photos in the capital city of Edinburgh. Both their outfits featured the Bruce tartan so it only felt right to have a bit of Scotland featured in their wedding celebrations.

The day and how it went
Edinburgh is such a photographic city and I had been thinking about the best places to shoot for months. I wanted to time it right so that we would get to our last location just has the sun was setting to get some beautiful light. Both Aishah and Aonghus had never been to the city before so they were relying on my judgement. I only met them in the hotel lobby at the start of the shoot. Normally I would meet the couples beforehand but this had special circumstances. I could instantly tell they were both really excited about the shoot. I took them to all the major spots in town – Edinburgh Castle, Royal Mile etc. plus a few lesser known locations before finally finishing up on Calton Hill which looks down over the city. Edinburgh is quite a hilly city too so there were a few steep climbs in heels but they both took it all in their stride.

Do tell us a little bit about yourself
I studied photography as a student but I was never really sure about what I wanted to do. I went for work experience with a wedding photographer and really enjoyed the buzz and thrill of photographing someones wedding. I started doing it as a business about 5 years ago and I have never looked back. I am based in Scotland but I do all over the UK and the rest of the world too.

How would you describe your photography style?
I like to keep things candid and natural as possible. If I find that a couple are uncomfortable infront of the camera, I try to put them at ease with a few jokes. I find the best moments though are the ones they don’t know Im taking.

What did you love about the day?
I loved that we had a lot of time to capture what they wanted and go to different locations. On an actual wedding day everything has to be done within a certain time and its normally less than you would like. With this shoot we were relaxed and got a lot of variety. They were also an awesome couple and were happy to follow my ideas.