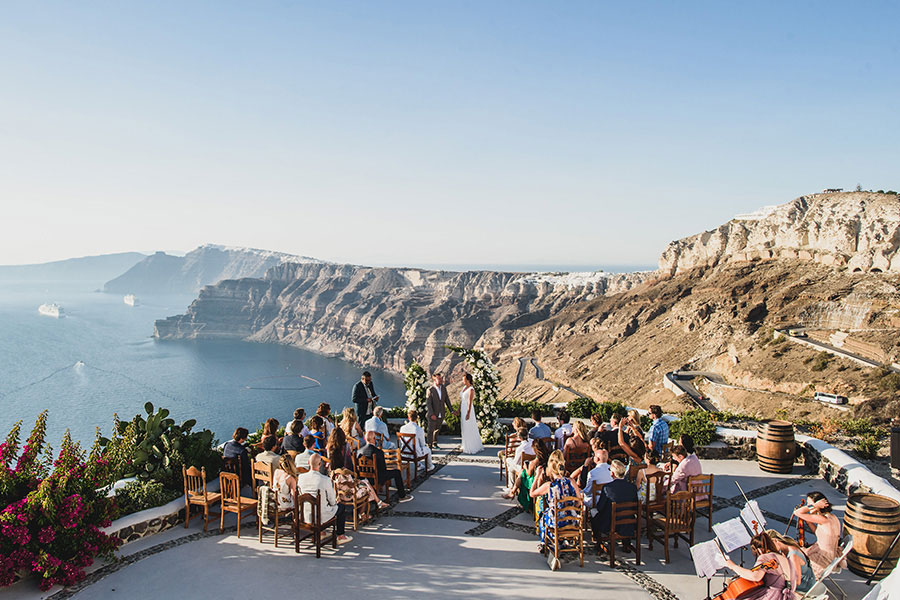 We feature a collection of beautiful wedding photos from destination weddings, some lovely shots, moments and great ideas. 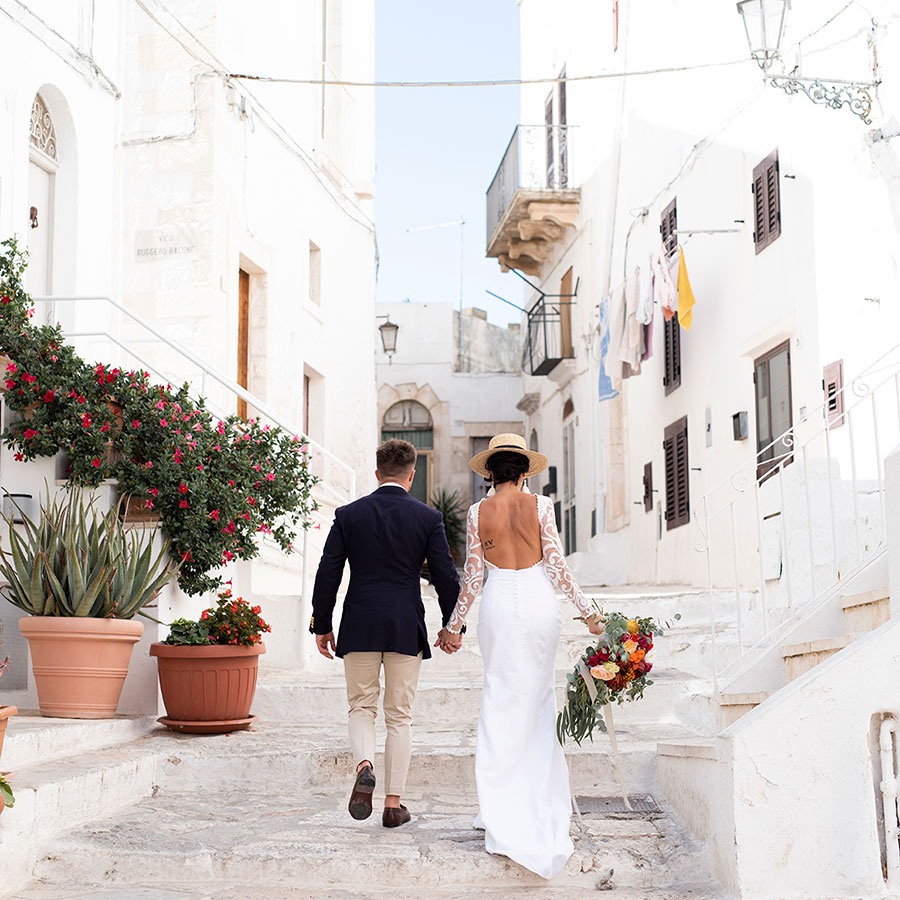 Photo by Kayleigh Pope Photography – This photograph of Natasha and Nigel was taken in the stunning Ostuni, Italy. The bride wore the most stunning Saldana Vintage dress and an on trend hat! 🙂 it was such a gorgeous day! 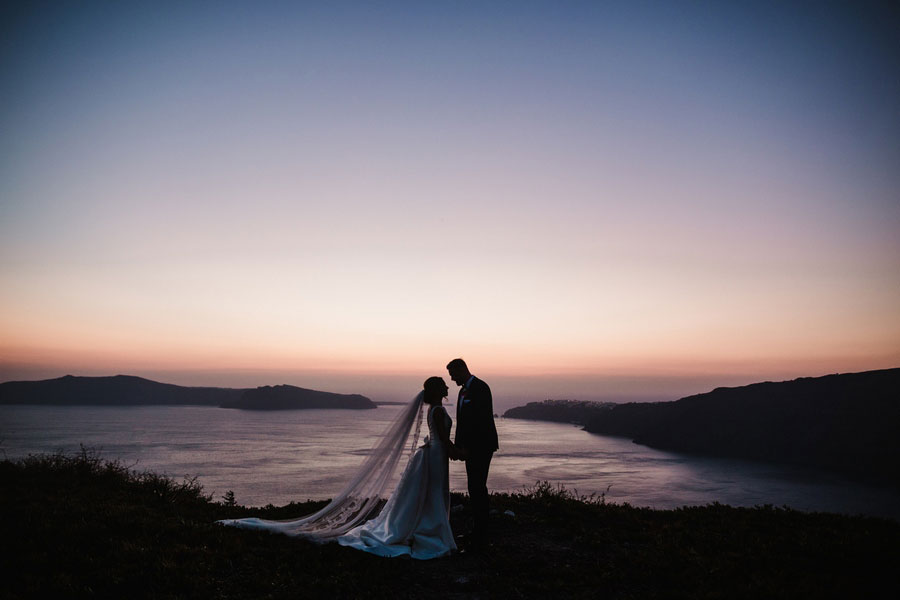 Photo by Amy Faith Photography – Lisa and Mark were married in Santorini and the night before their wedding we spent the whole evening dashing around one of the most picturesque parts of the island chasing a sunset and snapping images of the two of them haloed by sunrays. So when it came to their wedding day we felt a bit more relaxed, swanning over to the cliffside to enjoy the time AFTER sunset to capture these stunning Blue Hour portraits. The colours in the sky over Santorini after sunset are indescribably beautiful. 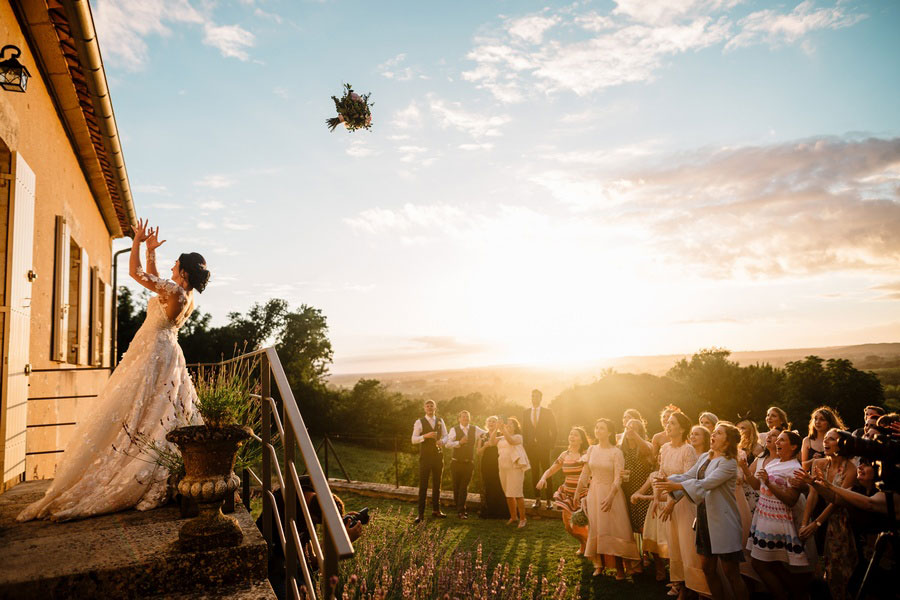 Photo by Amy Faith Photography – We had just finished Katie & Craig’s sunset shoot in the vineyards at Chateau Soulac and were on our way back to the barn to join all of their guests for the evening. Craig announced that he wanted EVERYONE to enjoy this sunset, so he set about wrangling up around 100 drunkish people to make their way across the chateau’s grounds from the barn allll the way over to the other side to look out over the Dordogne river at one of the most spectacular views I have ever seen. While we were all there we shot an impromptu group shot aaaand Katie (who had earlier, in her sober state, completely refused to throw her beautiful bouquet anywhere) had the amazing idea of tossing the bouquet from the spot where I had stood to capture the group photo. And this was the image I captured… in my opinion, ALL bouquet tosses should take place at sunset! 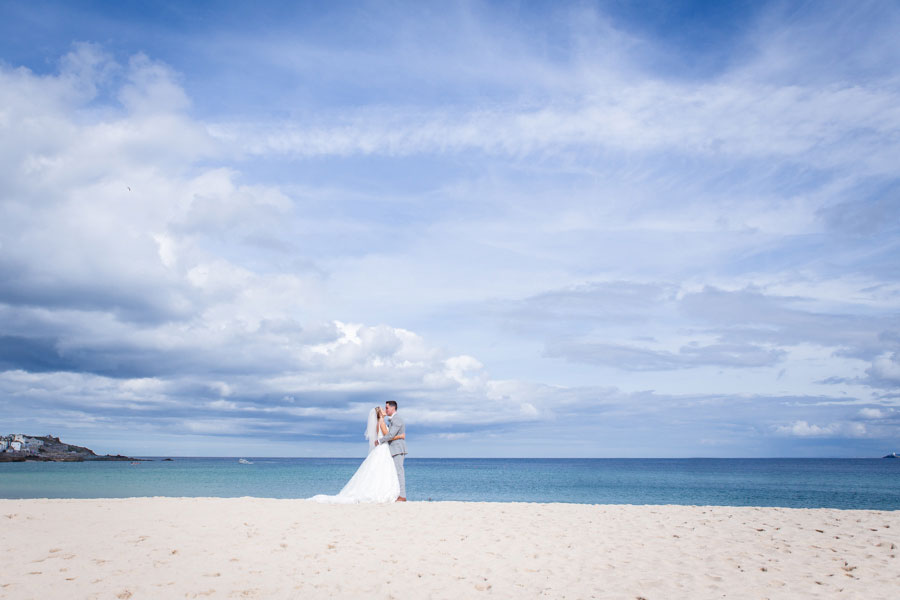 Photo by Brian Robinson Photography – Rachel & Jamie chose St Ives in Cornwall as the destination for their Wedding. And the weather did not disappoint. A beautiful September day and the unique light of St Ives made this shot on the beach look like we were somewhere on the mediterranean. 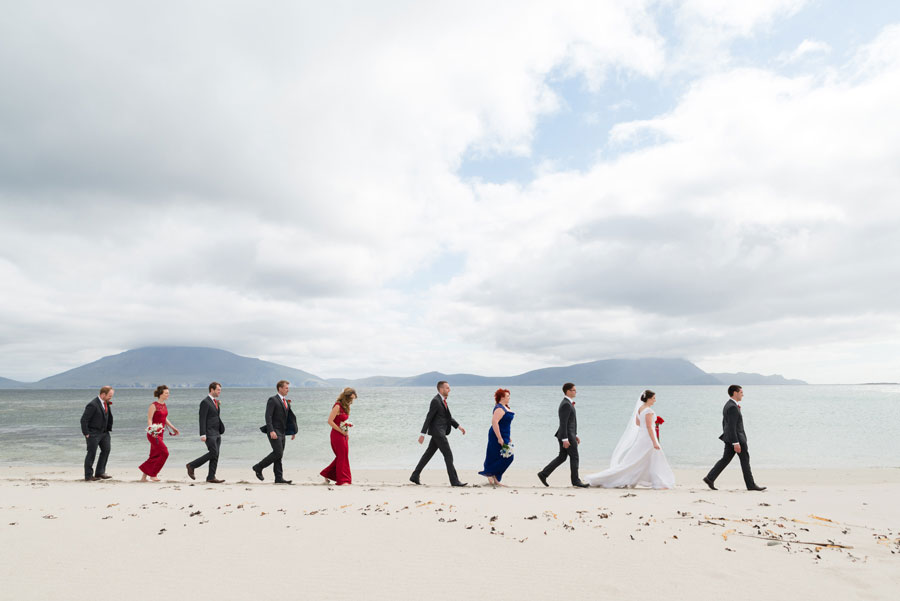 Beaches of the West Coast of Ireland

Photo by Andy Sidders Photography – This is my favourite shot from my first destination wedding, Cat & Ed’s wedding at Broadhaven Bay on the West coast of Ireland.
The shot came about when I was trying to take traditional formal group shots on the beach. Between different group photos, the sand around the party would get very churned up, as I wanted to keep the photos as clean looking as possible occasionally we moved to a new point on the beach. It was when the group were moving that I realised I had a fantastic opportunity for this more creative group shot. 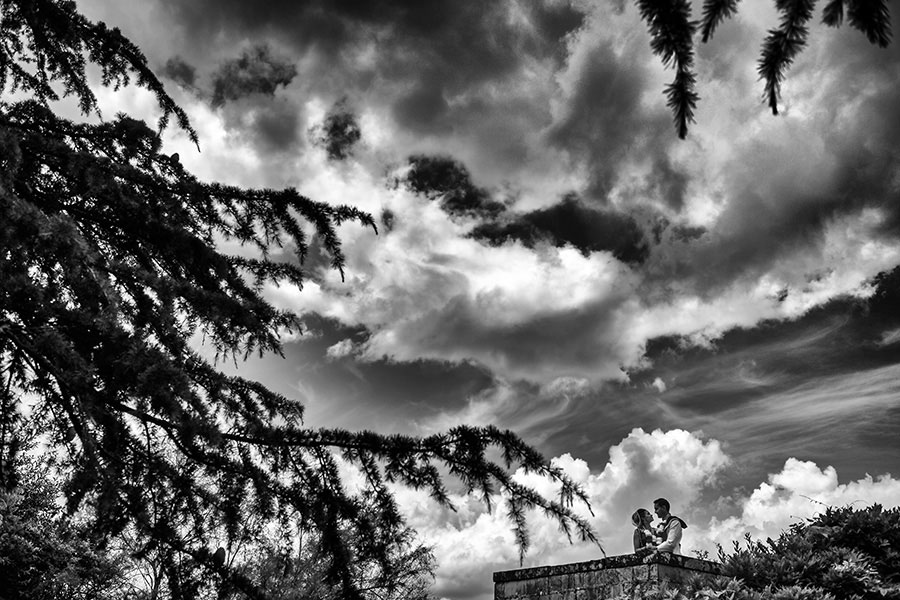 Photo by Nabis Photographers/ Chiara Ridolfi – I was in Tuscany in the Palagio castle, near Florence.
There was a beautiful scenery and we went to do some photos in a little tower.
I went downstairs and I shot when I saw them surrounded by the clouds. 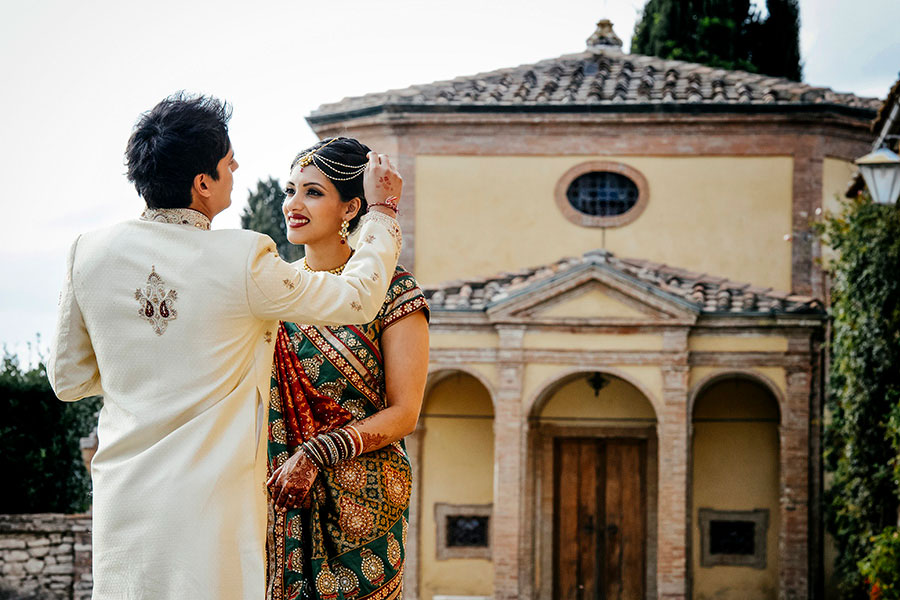 Photo by Nabis Photographers/ Chiara Ridolfi – I was so happy to shot this beautiful Indian wedding in Villa Catignano, a suggestive location in the heart of Siena hills. After the Indian ritual we went to do some photos inside the villa .
There was a beautiful atmosphere . They were very in love and it was so nice to photograph them. 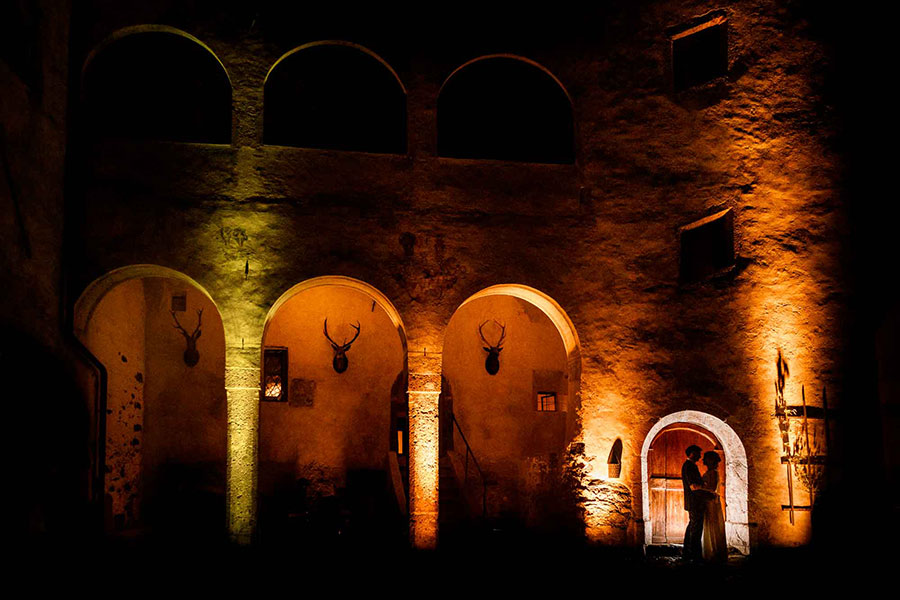 Photo by Damion Mower Photography – This is Sabine and Alex’s Austria wedding at Schloss Friedberg, near Sabine’s home town.

Photo by S2 Images – Nadhrah and Aaron both live in London and decided to have celebrations both in England and in Malaysia to make the most of the mix of cultures between them. This photograph was taken in the bridal suite at the Grand Hyatt in Kuala Lumpur. Imagine getting ready for your big day with a floor to ceiling view of the Petronas Twin Towers! 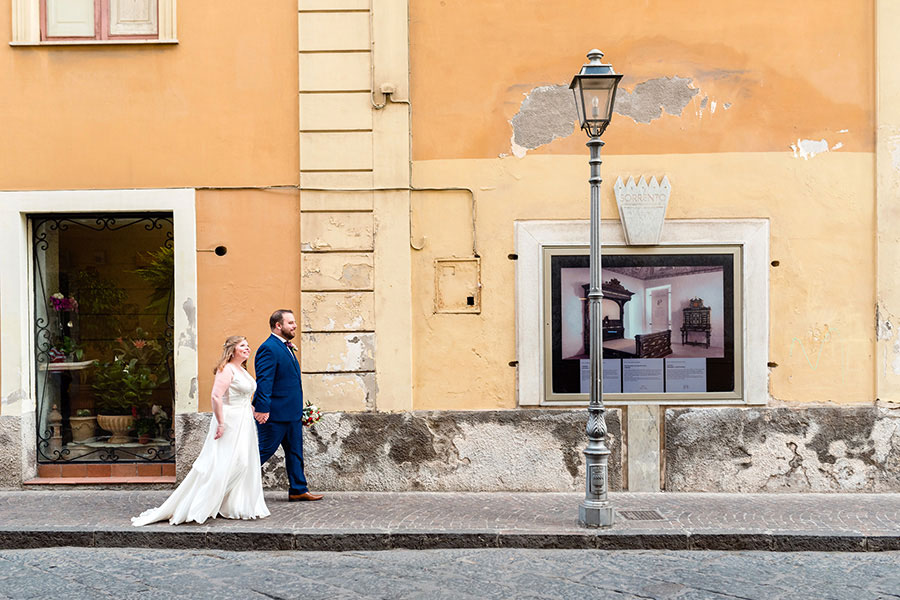 The streets of Sorrento

Photo by Sarah Williams Photography – I have recently got back from photographing the wonderful wedding of Charlotte and Joe in Sorrento, the very same place I got married myself.
The streets of Sorrento are so pretty so we factored in some time for portraits exploring the town. I love this photo because of the pretty coloured walls, the word Sorrento featuring on one of the buildings and a happy and relaxed couple having the best time! 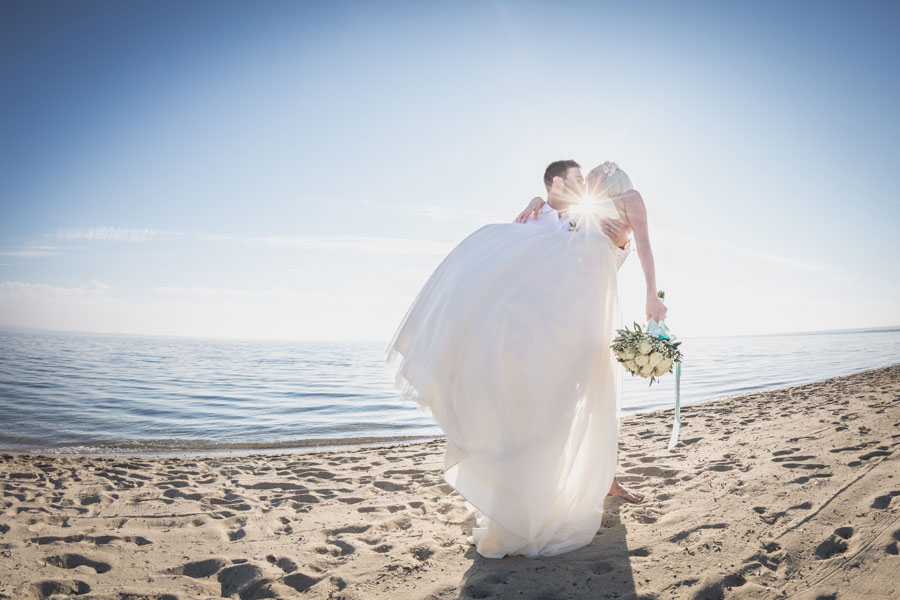 Photo by Ebourne Images – There are, it seems, a million ways to tie the knot. I have photographed newlyweds from a two-seater aeroplane at 2,000 feet and I had the privilege of shooting a blessing at Stonehenge. I have captured the special moment at St Paul’s Cathedral and also some of the most grandest venues across Europe. But often, you just can’t beat a beach wedding… or that kiss on the beach.

Photo by The Gibsons – Bring us back to Mexico where this beautiful and serene beach wedding took place. Just steps away from where they tied the knot were some beautiful palm trees and greenery away from the tourists to get a feeling that they were all alone in a very busy place. 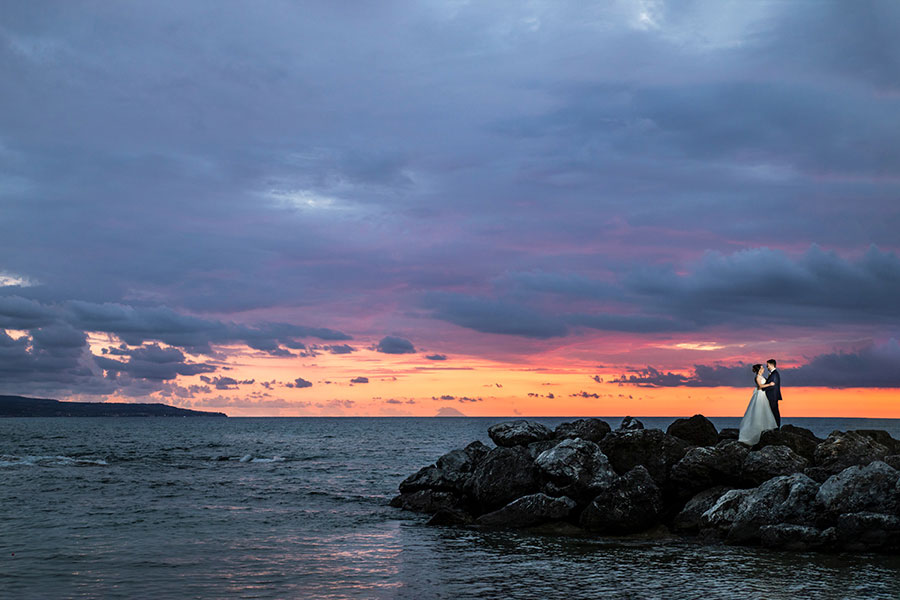 Photo by Roberto Schiumerini – Beautiful evening with these newlyweds. To take this photograph we waited for a beautiful sunset in Calabria (Italy). 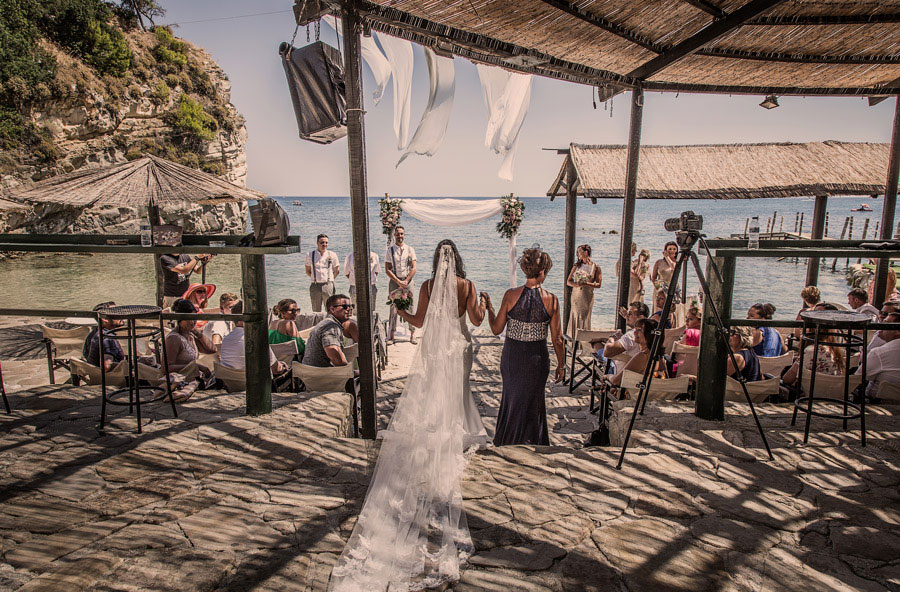 Photo by Christian Allen Photography – This wedding in Greece, was held on Cameo Island, Zante, a popular overseas wedding destination. This image is always a favourite of mine as I love looking at the faces in it and especially the Groom’s, with all eyes trained on the Bride’s arrival. One of the biggest challenges for a destination photographer, especially in very sunny conditions, can be the high contrast but my big issue on this Greek, August day was the extreme heat making the suncream on my face run into my eyes making it difficult to keep my eyes open – man, did it sting!!!! Hot wedding indeed lol! 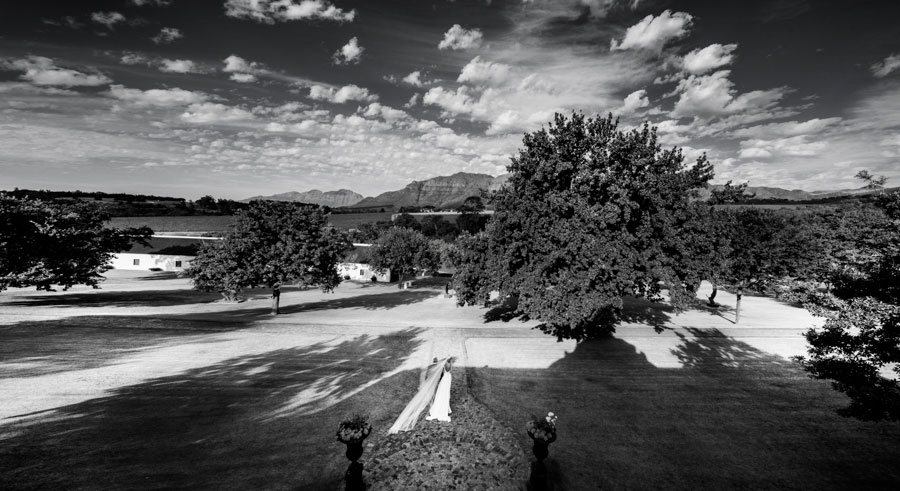 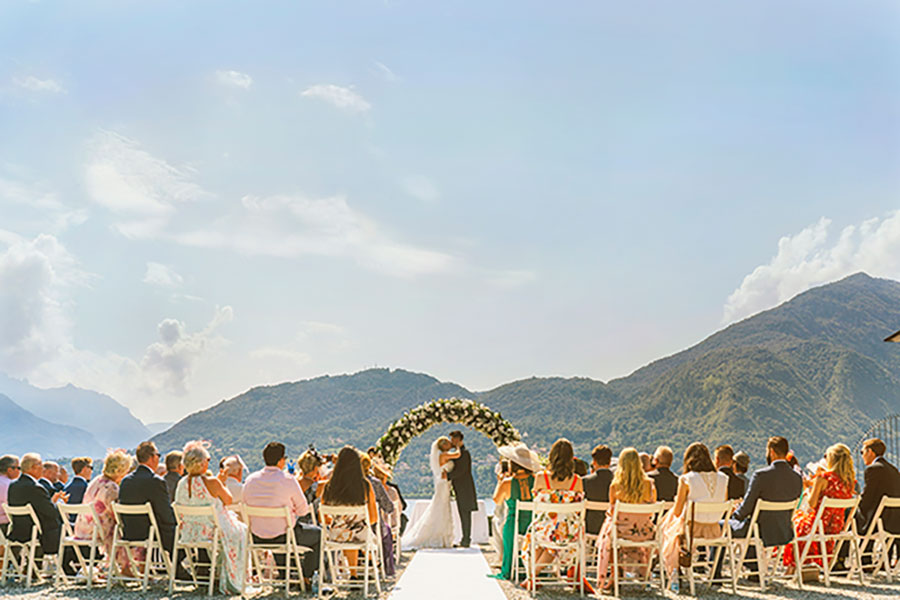 Photo by David Glover – This wedding was at Villa Carlotta on the side of Lake Como in Italy in August of this year. The grooms grandad was unfortunately unable to make it due to illness, it was later discover he passed during the wedding.
On reviewing the images after it seems that he did actually make the wedding.. During the first kiss a man appeared in the clouds and gave a huge thumbs up, we couldn’t believe when reviewing the images on the camera but seems grandad did make the wedding. 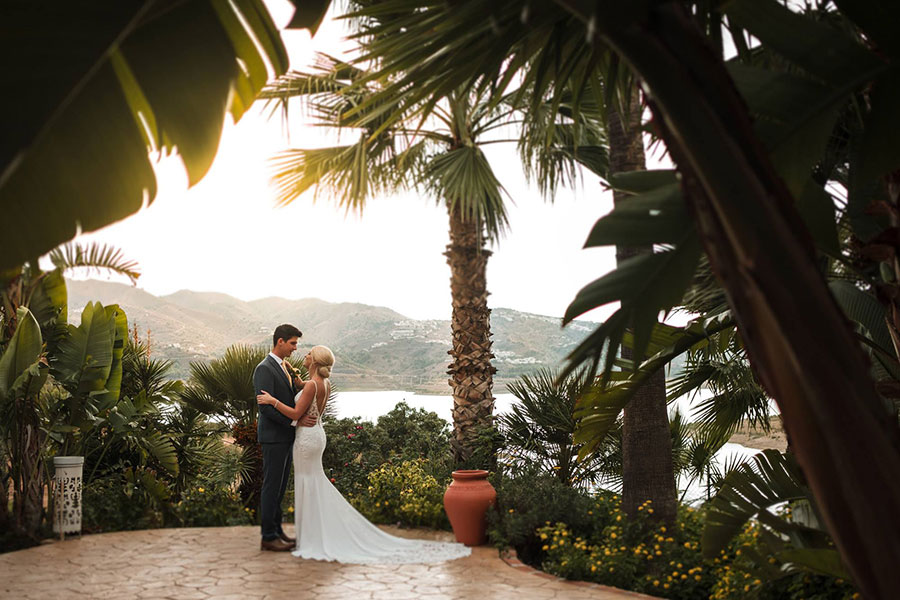 Photo by Matthew Grainger Photography – Ryan & Charlotte’s beautiful wedding in la vinuela, Spain was the perfect day in one of the most beautiful venues I have been to. The hotel overlooking the lake with mountain views all around was the perfect setting for the outdoor ceremony in the sun.

Alone into the tropical island

Photo by SV PHOTOGRAPH – This photo was taken during a destination wedding with a couple from US visiting French Polynesia.
We drive them into the bush, on the wild part of the island. 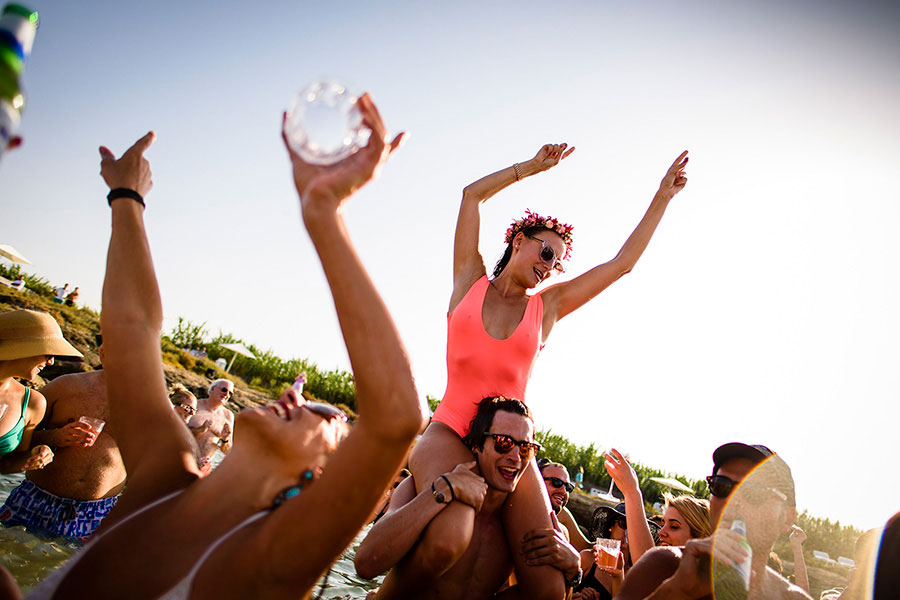 Photo by Spotyphoto – What do you do when your pre-wedding party is in Puglia and also conveniently located on the beach? You take a dip in the sea, of course! As you can see, everyone agree and joined the bride!
I love this image because these people really know how to party and were up for some unconventional wedding photos. 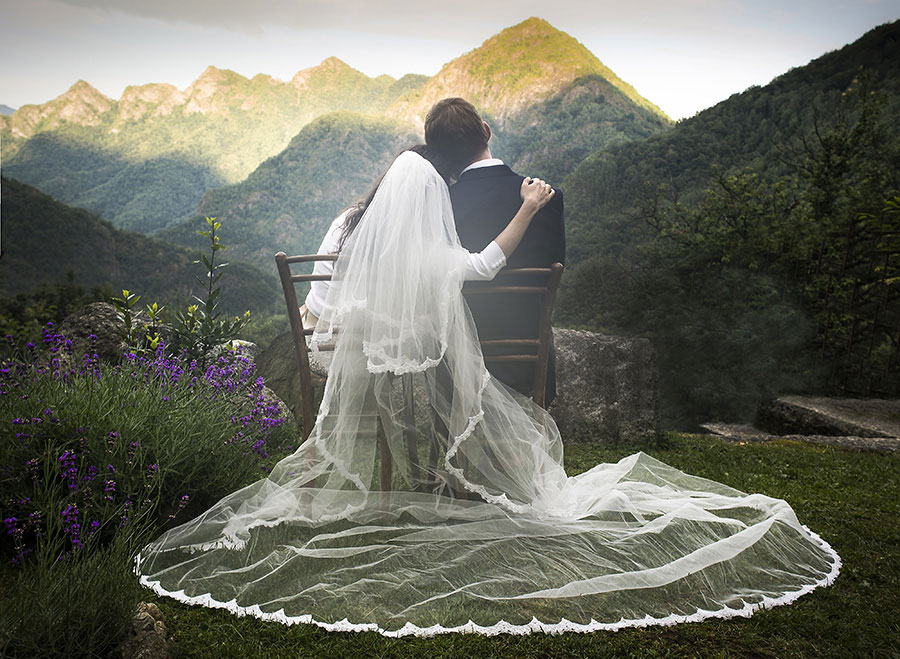 Photo by Jason Williams Photography – I had already shot this couple’s wedding in Camden, London. But when they told me they were going to have another catholic ceremony in a tiny village in northern Italy near the Swiss Alps, I obviously jumped at the chance. I advised the bride to buy a cathedral veil which you see in the image. Everybody was in the throws of a party but I saw this beautiful sunset about to disappear and persuaded the couple, well, the bride, to put her veil back on and come and have a seat with her husband. Its a fairly unorthodox image as you cant see the couples faces but that makes it a more private moment, and it remains one of my favourite images from my work.

The dress that became a spectacle

Photo by Sam & Louise – Lots of brides want beautiful show stopping photographs of their wedding dress, but understandably many are a little fearful of doing anything *too* crazy. So when I had the idea of suspending Jen’s dress from the washing lines above the cobbled streets of Lake Orta, I never thought in a million years that she would agree to it. But she did! We carefully secured the dress to the hanger and inched it away from the balcony until it was in the perfect spot. Of course, it’s not every day you see a wedding dress suspended above the streets, so it became quite an attraction. Groups gathered and watched with many people took their own photographs! It’s still my favourite dress photo 3 years on. 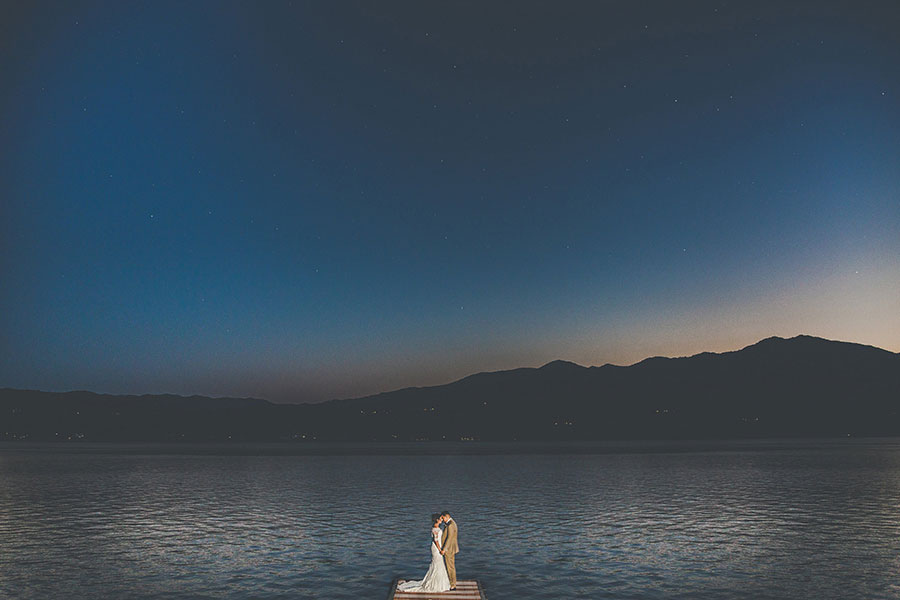 Photo by Sam & Louise – We’re definitely home birds and prefer to stay within the UK when it comes to weddings. When our good friends and super talented wedding film makers, Unique Visuals got married and asked us to photograph their day though, of course we jumped at the chance. Their wedding was perfect and in the most stunning location. This was taken just after sunset out on the Jetty with the mountains in the background and the stars twinkling above. 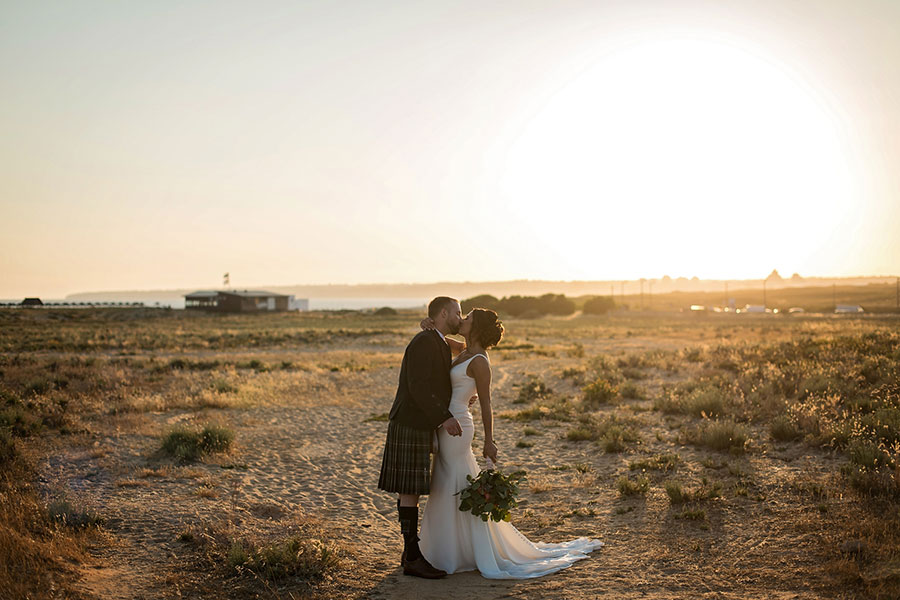 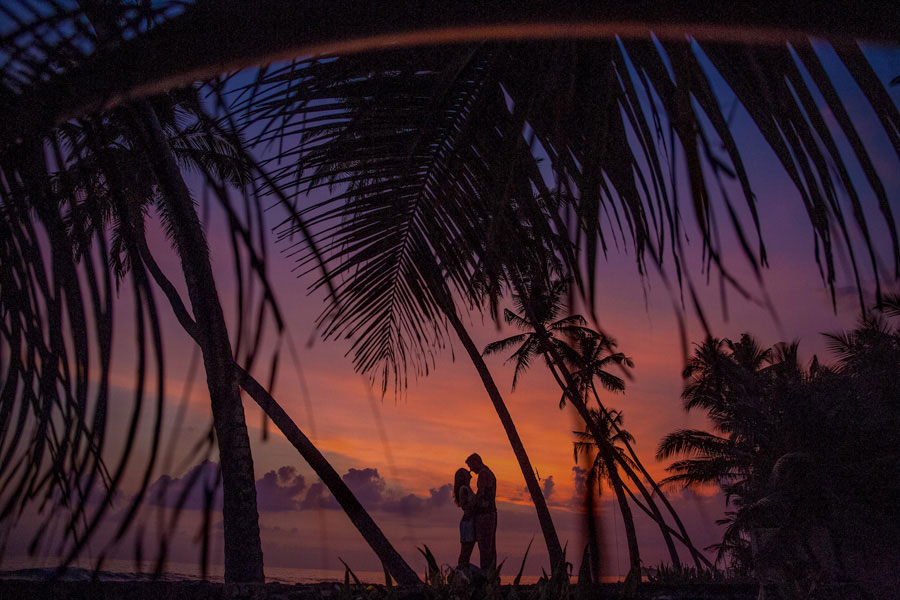 Annie and Andy in Sri Lanka

Photo by Andy Mac Photography & Filming – I just love it when a wedding just comes together in the best possible way – with an awesome couple, lovely family and brilliant friends surrounding them, an epic location and insanely hot weather. I had to try and capture something really different and special that made people stop and look and go wow – I want to be that couple right there, right now. 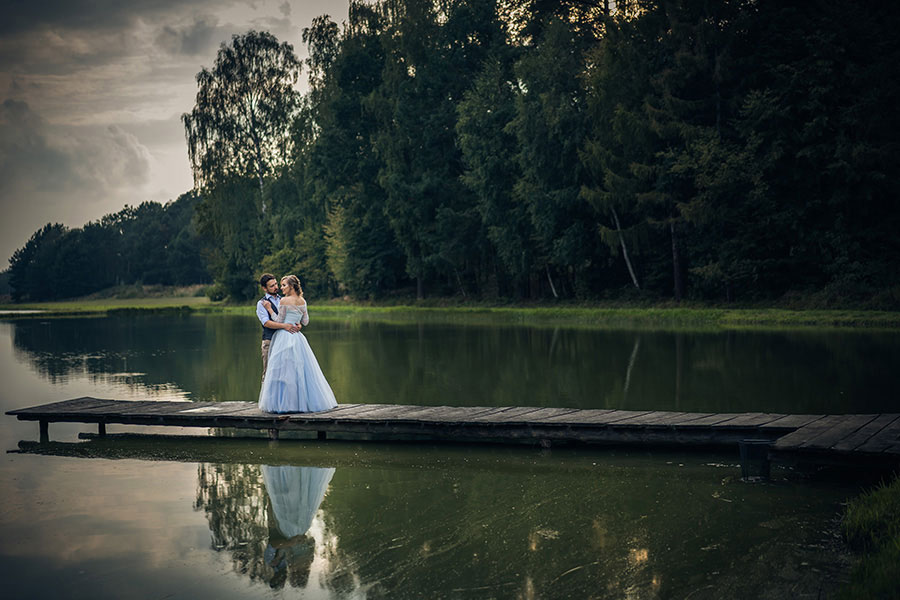 Photo by Younger Photography – Bride & Groom ( Agata & adam) with their dog Dida in Poland. They live in UK but decided to get married in Poland followed by DIY reception at amazing , peaceful Old Mill eco farm in South West Poland.

Photo by Mark Wallis Photography – Suzanne & Steve held their Mamma Mia-themed wedding ceremony at a winery on a clifftop overlooking the famous caldera of the Greek island of Santorini.