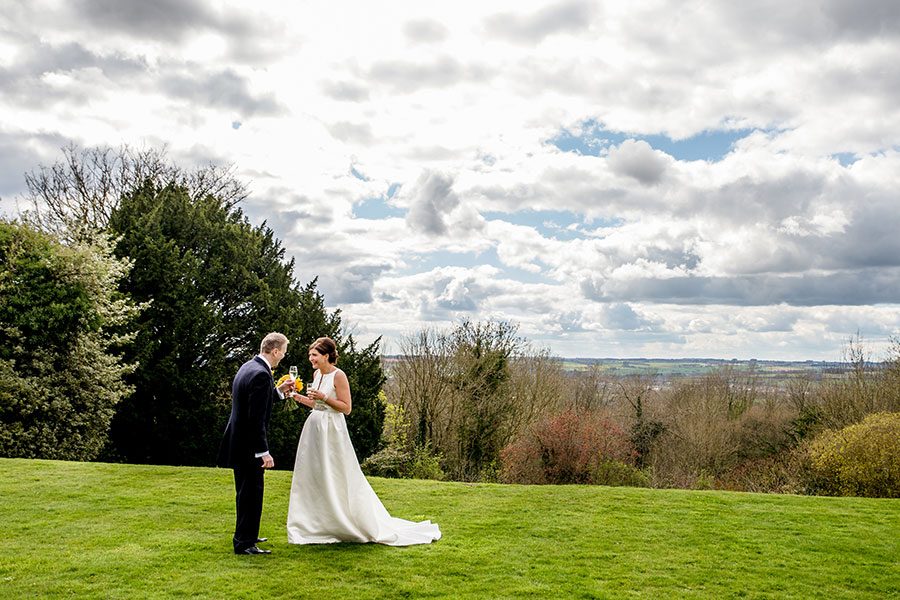 We feature the lovely wedding of Paul and Lyndsey that took place at Wyck Hill House. Their special day was captured by South West Wedding photographer Capture Every Moment.

Paul and Lyndsey have been together for nearly seven years and finally tied the knot at Wyck Hill House Hotel in April. They have six children between them and involved all of them in the day, the youngest three daughters were bridesmaids, the oldest two daughters legally witnessed the ceremony and Lyndsey’s son walked his mum down the aisle and even said a speech.

The morning started with snow on the ground but the sun shone throughout the day, despite it being very chilly Lyndsey and Paul never let that bother them during photos. The wedding took place at Wyck Hill House in the Cotswolds, which is a beautiful setting for a wedding. Lyndsey and Paul both said their own vows to each other, with family and friends watching on . Paul’s sister and Lyndsey’s eldest daughter both said a reading during the ceremony adding a nice personal touch. Lyndsey and Paul have a love of karaoke and organised a “marryoke film” to take place during the day which gave the bride, groom and guests a lot of fun! The table names for the meal were named after their favourite karaoke songs adding a lovely touch. The first dance was brilliant, Lyndsey and Paul had a few dance lessons before the wedding so they were able to give a great performance on the dance floor!

We’re a father & daughter team and photograph every wedding together and have done for over seven years now. Based in the Cotswolds and both have a passion for what we do.

Our style is to photograph the day as it naturally unfolds, telling the story of the wedding and photographing any requested group photos as well as natural bride & groom portraits and of course the little details.

What did you love about the day?

That’s such a hard question…..Everything! The venue was absolutely gorgeous, the first dance was awesome, the guests were really friendly, the styling was beautiful but above all else Lyndsey and Paul are such a great couple and the perfect match for each other.

What advice would you give to couples planning their wedding day?

Research your photographer. Look at their website, blog, social media pages and read reviews. It’s important you meet your photographer in person before booking because it’s such a long day for you to spend with somebody if you don’t like them! Have a meeting and a good chat over a cuppa of two, asks questions and look at sample albums. You don’t have to book right there and then, go away and have a chat with each other….just be sure you like the photographer as much as you like their work.

What Lyndsey and Paul had to say

“We would highly recommend using Capture Every Moment. From the first meeting, Carissa and Paul were really friendly and seemed genuinely interested in us and our wedding. The photos from the pre-wedding shoot confirmed to us that we had made the right choice (Paul isn’t afraid to get muddy to get the perfect shot!). On the big day, they were amazing. Not at all pushy but equally managing to get people in the right place at the right time. We were keen to avoid too much formality and they fulfilled the brief perfectly. The photos they produced are amazing and it has been a real challenge narrowing them down to fit into the album! Thanks again Carissa and Paul; two genuinely nice people who have created an amazing record of our day. Paul and Lyndsey”