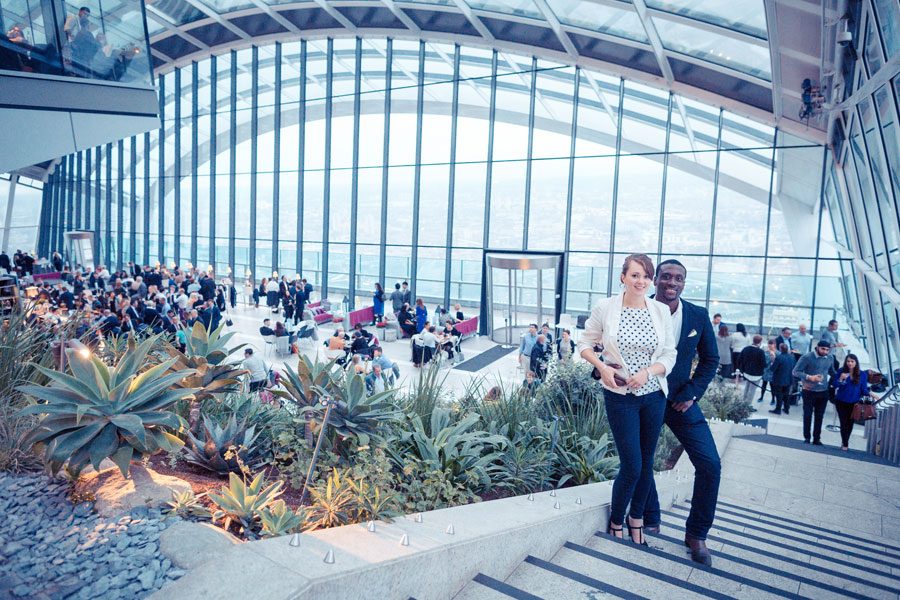 We feature a lovely surprise engagement shoot at the Sky Garden in London where Rele went down on one knee to propose to Vicky with it all captured by London based wedding photographer Terry Li.

Rele is a doctor and Vicky is a teacher. They met 5 years ago at a mutual friend’s birthday party and got chatting when the host of the party was late. They got together officially on New Year’s Eve of the same year, and it wasn’t long before they knew that they wanted to get married, but they had differing ideas as to when!

A little bit about the day and how it went

Rele finally proposed 4 years into the relationship. It was Vicky’s birthday, and she had a full day of teaching at work. Vicky was shattered, and then she got a phone call asking her to go to the school office, which was the last thing that she wanted after such a long day! However, to her surprise, there she found a large bunch of flowers waiting for her, and a card attached which was the start of a treasure hunt, which eventually took her into a rain-soaked London, where Rele was waiting. He proposed at Sky Garden, avoiding the rain, only a couple of metres away from the location of their first kiss – Fenchurch Street Station.

A London based female wedding photographer who provides reportage and documentary style photography service in wedding, engagement and lifestyle portrait. The Top 10 Wedding Photographers in the UK of 2016 on YPWP, the Regional Finalist at The Wedding Industry Award 2015, judge at the YPWP Wedding Photos of the year 2014 Competition and been featured in leading number of wedding magazine and blogs.

Soft, Natural and Story – telling. My approach is subtle and unintrusive, so I can capture all the emotion and events as they happen.

Terry was there and captured it all; from Rele getting down on one knee to pictures outside of Fenchurch Street when she had aching cheeks from smiling so much. In the end, it was an amazing end to a long day and having lots of lovely pictures taken to remember the event was such a fun way to spend the evening too!