Home / Uncategorised / A Wedding Off The Beaten Track

A Wedding Off The Beaten Track 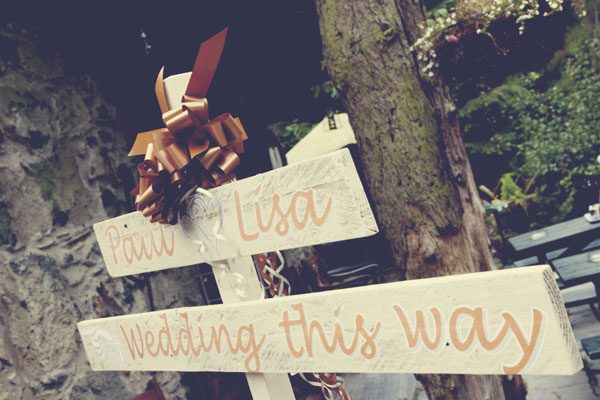 Todays featured wedding is something a little different as we head off the beaten track and into the mountains for Paul and Lisa’s wedding day captured by Rocking Weddings.

The Couple
Paul and Lisa Wedgwood from Stoke on Trent met in 2010 by chance when they were introduced to each other via some mutual friends. They soon realised they had absolutely tons in common, not least their love of vintage Hot Rod trucks and bikes, and rockabilly bands.
They didn’t set out to marry quickly but they knew they would eventually, having both been married before. Not even thinking about a wedding ceremony, one wintry day they took a drive up to the hills just over the Shropshire border into Wales and found Pystill Rhaeadr Waterfalls. They knew that this would be the place they would have their wedding.

The Venue/Location
Pystill Rhaeadr Waterfalls is located at the foothills of the Berwyn Mountains and has the highest waterfall in Wales. The site itself is a popular retreat for those wishing to get away from the hustle and bustle of daily life, there’s not even a phone signal! The small village of Llanrhaeadr close by has a small population, with one shop and one pub to serve the locals. This location perfectly suits Lisa’s sensibilities as a ‘Fairy Queen’ who was to marry her Rockabilly Prince (it’s in the invitations!)

After a short non-conformist ceremony where they pledged their love for each other witnessed by just a few very close family members and friends, a nice cup of tea and a slice of cake to keep the hunger at bay, everyone was treated to a super lunch at a nearby guest house, Plas Uchaf (which means ‘The House on the Hill) comprising all locally sourced ingredients in the menu.

The whole day was meant for a relaxed and friendly atmosphere with just the most important people in attendance – Lisa remarked that it is always difficult to draw up a guest list and especially for a wedding, but would hope that those unable to make the guest list would understand the intimacy of their day and they certainly would catch up with the rest of their friends on a personal basis – and they did just that, their honeymoon week was spent at The Trip Out Festival in Bedford, an annual meet up of Hot Rod Rides, Rockabilly Bands and chilled out people in a field, which is their favourite pastime.

The venue was dressed by the couple themselves, or should I say Lisa, with help from a few friends with virtually every piece handmade including flower pom-poms, decorations, and a ‘Wishing Tree’ containing their most treasured wishes for the future.

As Lisa and Paul are great fans of the Rockabilly scene, Lisa contacted many of Paul’s fellow Meteors (band) fans from across the world, who all sent him their ‘Pearls of Wisdom’ to wish them well for their marriage, and some more absent friends arranged for a signed ‘Meteors’ poster to be delivered to the wedding venue as surprise! Quite often all the attention is on the bride at a wedding, and so this time, Lisa made sure Paul had equal fuss made of him. 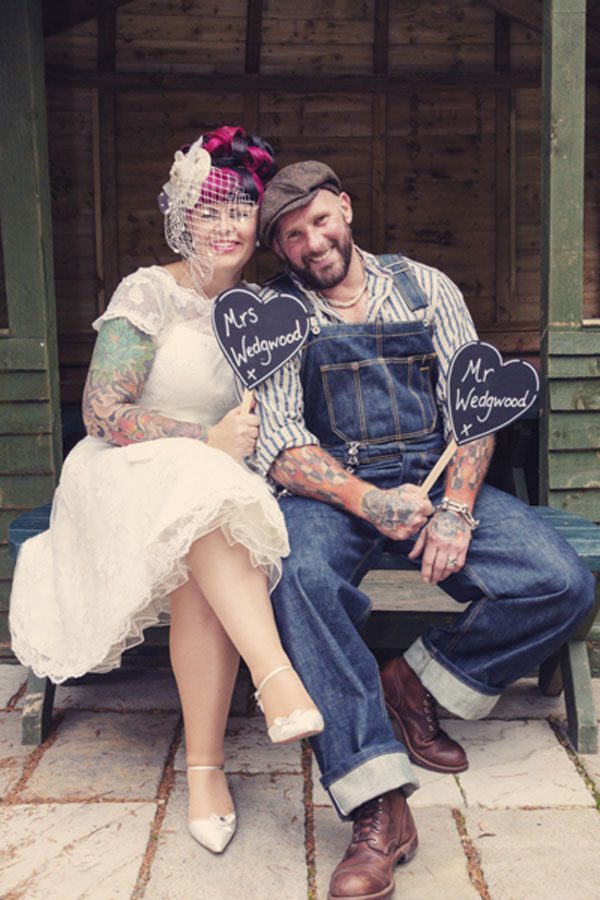 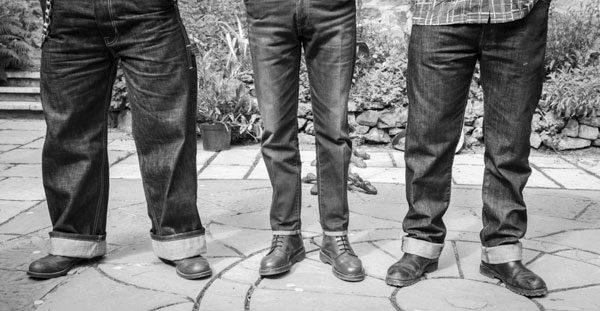 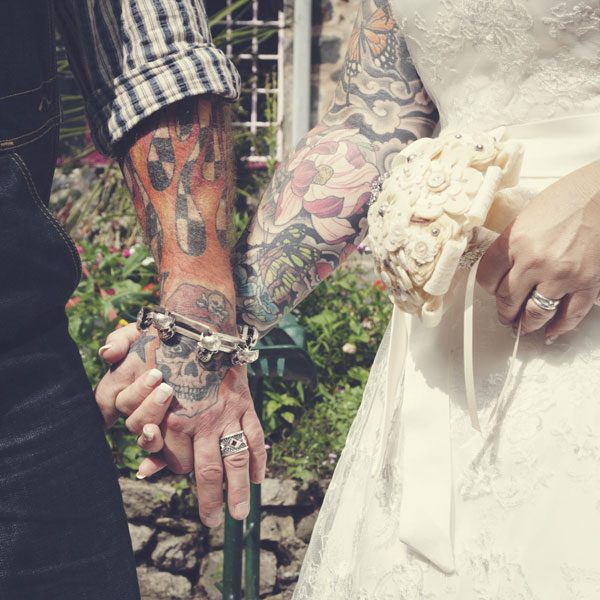 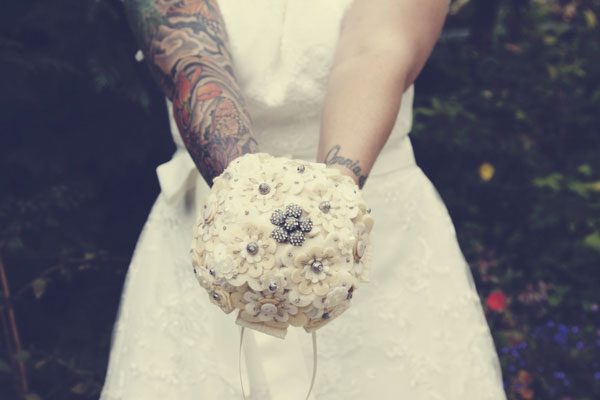 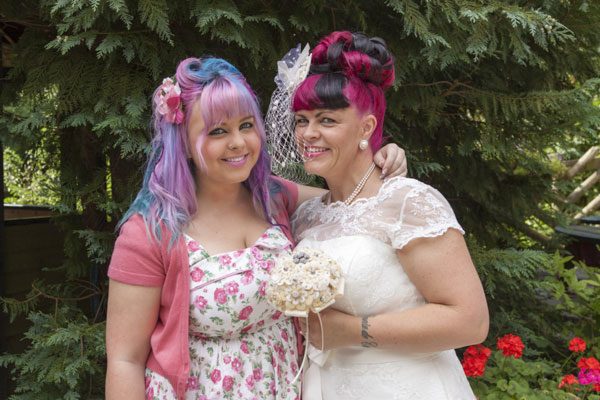 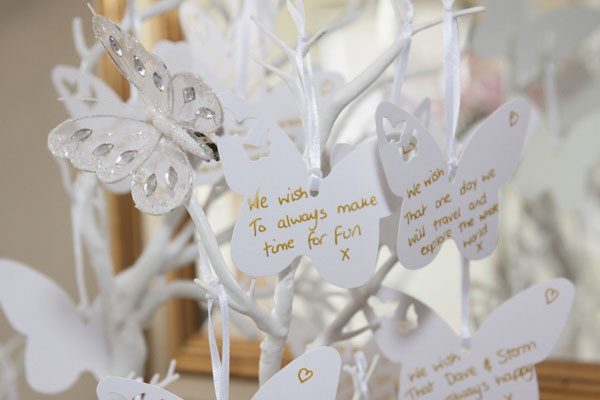 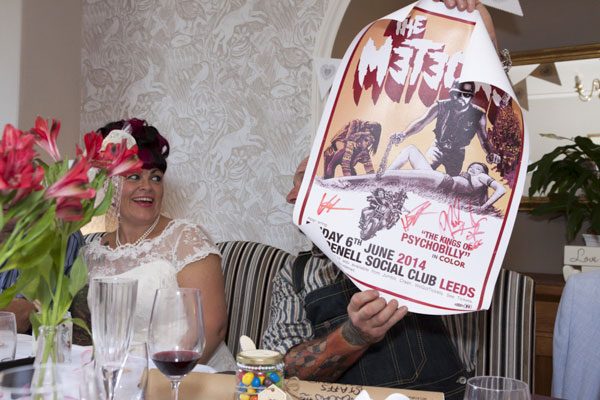 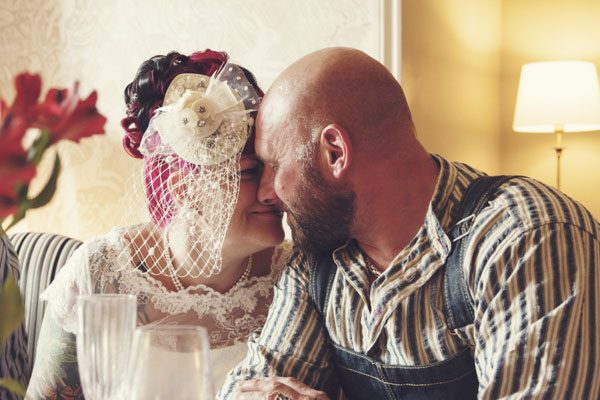 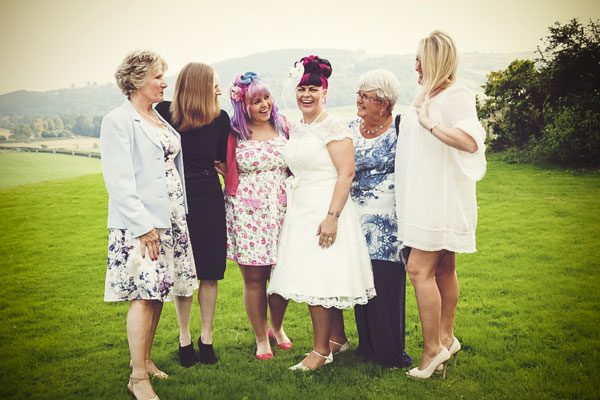 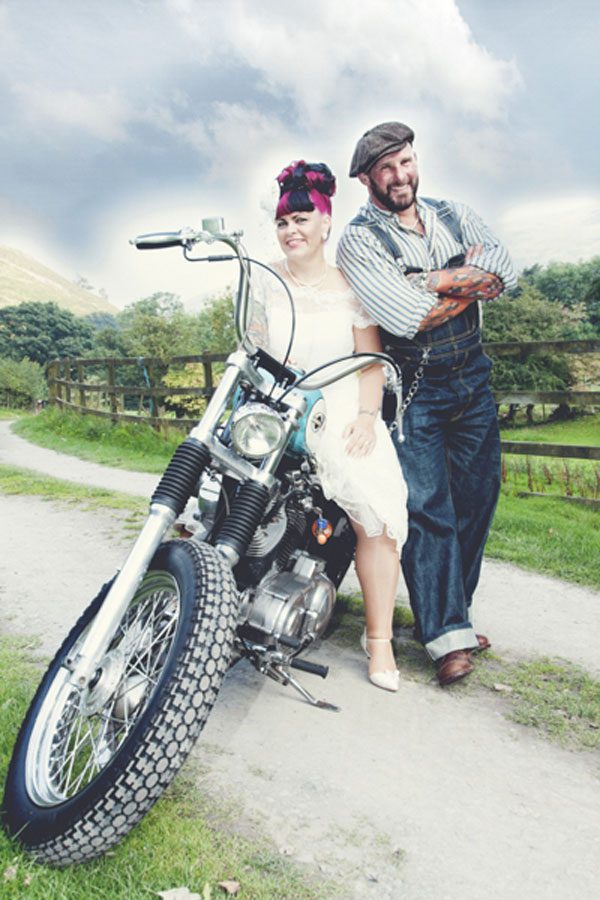 Dresses & Outfits
Lisa managed to source her dress from a Far-Eastern tailor on Ebay. This can be quite a risk sometimes and you do hear horror stories about garments being nothing like your dream dress – but on this occasion Lisa was in luck! Her hair and make up were done locally with help from her daughter Gina and shoes were sourced in a local bridal shop sale. Bouquets and boutonniers were handmade by White Bryony Flower Creations.

Paul’s outfit was from Pike Brothers Superior Garments (A German menswear company) – his outfit also won him their ‘Pike of the Month’ for choosing to wear their clothes for his special wedding day!

About Me
Well, I’m Helen (you know that), I’m a mid-life crisis photographer….or should I say young photographer turned banker for many years, always knew that I didn’t fit into the corporate world and so in 2010 decided to return to my first love of photography. I went and studied again as I’d missed so much of the digital world and came out into the world clutching my degree certificate two years later, at the tender age of 41….

Rocking Weddings was born about a year ago as a concept, having previously shied away from the often saturated wedding industry. I love to photograph people, sometimes the more off the wall the better, and Rocking Weddings is here to cater for all of the misfits, offbeat, off the wall people who don’t want to follow any wedding traditions. We welcome Pagan Ceremonies, LGBT couples, Goths, Steampunk, Rockers, Mods, Bikers – just anyone who loves to do things differently.