We love a black and white wedding photo, and after seeing hundreds of entries for our 2014 Wedding Photo of the Year awards we decided to pick our some of our other favourites and showcase them to you.

Photo by Alberto Muriel Pina – “The photo was taken while the bride was getting ready at home before the ceremony, in Salamanca, Spain.”

Photo by Barney Walters Photography – “During the wedding reception at an outside summer wedding on the coast of Cornwall. Bride’s picture being taken by a friend.”

Photo by Chantal Lachance-Gibson Photography – “Mother of the bride at a wedding of Lisa & Robin at Atholl Palace in March this year. Great silhouette – reminds me of Audrey Hepburn. Saw the light shining through and took the opportunity and let out a little eek!” 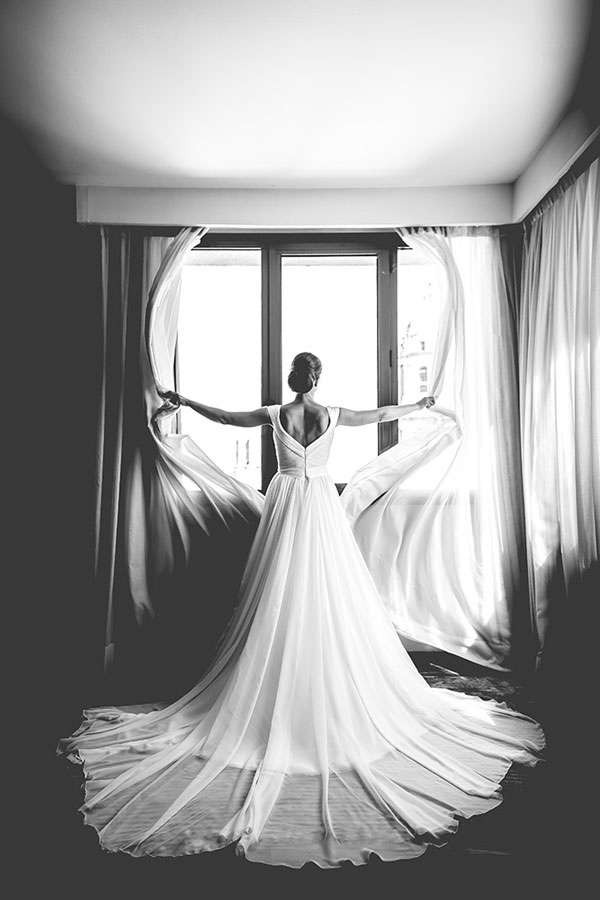 Photo by PhotoEmotions by Oscar Anta – “The photo was made at a time out of the car before the bride before first seeing her boyfriend. Her father said his last words and advice.”

Photo by Paul Santos Photography – “It was taken at Brinkburn Priory in Northumberland. A dark hallway which allowed me to create a strong focus on the couple by placing them inside the doorway. The staircase just adds an extra sense of interest.”

Photo by ION Photography – “July 2014 in the biggest village in Europe, Marisel, Romania. Newlyweeds, a family of horses, the rain starting on the background and a tree of life – as their new start in life. It was just  one shot, nothing posed…”

Photo by Rob Grimes Photography – “I was shooting this wedding in Scotland alongside another photographer and I was shooting the guys having drinks in the arch of the window. the light was so perfect behind them all and the colours that was window light was producing was stunning. But in my head was this image and all in B&W. Sometimes you just see something regardless of the colours that you know will look great in B&W. ”

Photo by Steve Wheller – Art by Design – “The Ring – I knew I wanted to try this shot before the day and knew in my head how I wanted it to turn out. This was shot at a church in a village called Radyr in South Wales. I took two shots, one with the bride holding the ring and one of the groom in the background and then merged the shots together in photoshop.”

Photo by Tony Hart – “Emotion and dynamism are probably the qualities I desire most in my photographs and this frame from Harriet & Alistair’s wedding at Hampton Court House has buckets of both.

Shot at the very close of proceedings, moments before Harriet and Ali were whisked away by car, I love the unrestrained nature of this image. By this stage in the evening all the guests were wonderfully tipsy, having a complete whale of a time and the raw energy of this moment was just awesome. Sparklers, laughter, cheering, this was a simply fantastic wedding, a fantastic crowd and above all a fantastic couple. What a way to end the day!”

So which photos caught your eye? Let us know your favourite below!