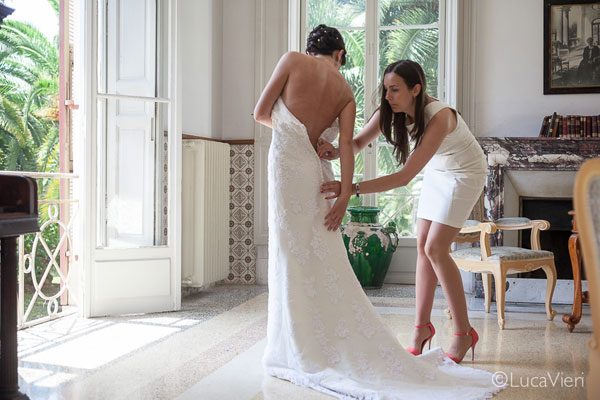 Today we feature Rocco & Nastya, from their engagement shoot in Nice, French Riviera, through to their beautiful weddings in Bordighera. Both these days were captured by Luca Vieri, a creative reportage wedding photographer who works in his studio on the coast, near the French Riviera.

The Engagement Shoot
I met this couple because they wanted to have some photos of themselves in the magical city of Nice. This city is important to them in the history of their relationship, as it has been the site of many emotional farewells and reunions.
We spent a beautiful day together, creating a natural connection between myself and the couple. This allowed me the possibilty of taking various shots full of emotion, and love without the awkwardness of being a spectator. Shortly after we met again to photograph their wedding.

The Wedding Day
Young and in love, they wanted a fairytale wedding day. For this reason, the preperation for both of them was held at the romantic Villa Etelinda, remaining from the era of Regina Margherita. Here they are, both of them skimming around this stunning location, without meeting each other they prepared for their magical day.

If you would like to find out more about Luca and get in touch with him then you can do so on his profile page here.

Last month we also featured this Wedding in Nice, French Riviera captured by Luca too.