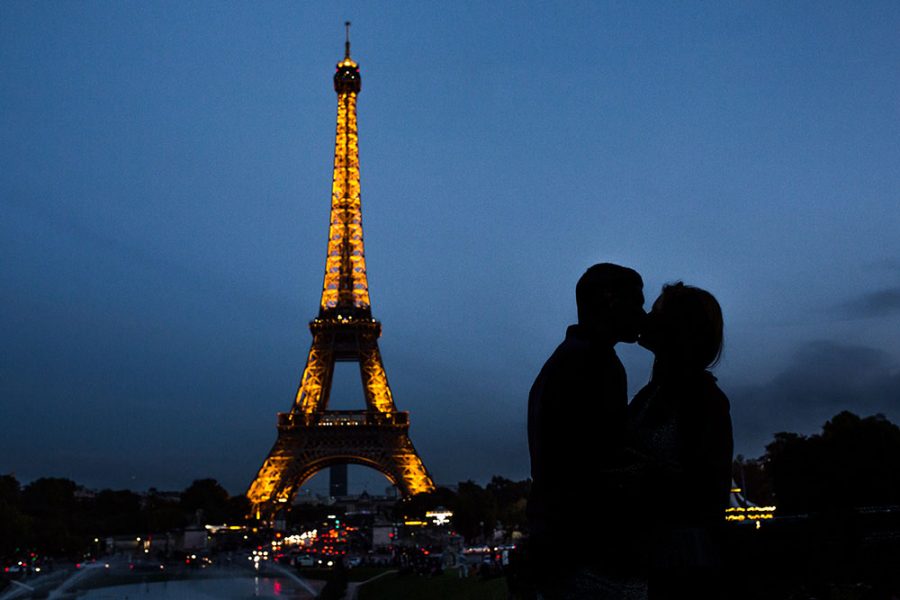 I’m delighted to share this stunning Paris engagement shoot captured by Nick Rutter Photography, a wedding photographer based in Dorset.

Tom and Jess are marrying at the Multi Award winning wedding venue, The Italian Villa near the beautiful beaches of Sandbanks and nestled in with the famous Compton Acres Gardens in July 2016

They love travelling and because they knew how creative I like to be with my engagement shoots, they suggested Venice. They then decided that Paris would be even better for them. So we organised everything for the 3 days trip to not only take some beautiful shots around the centre of Paris but to also get them used to the camera, the way I shoot and importantly for me, get to know each other better.

We arrived about lunchtime to our hotel, put our things in our rooms and then had lunch together. If I am doing a destination wedding or engagement shoot it’s always good to do a recky of the area or specific location the day before (if the weather is good) to know your bearings and for me to make some initial creative decisions. We tried a few shots just to get them used to thing a bit as well as scout out good locations around the main attractions to them like the Eiffel Tower and the Arc de triomphe.

The 2nd day was the main shoot. It was a good job we did the recky the day before as the Metro is very key to getting around the city but pretty easy.

We had breakfast in Notre Dame to then go around the cathedral and to the infamous bridge with all the ‘locked in love’ pad locks on. Tom and Jess bought one and locked their love there too. We headed to The Eiffel Tower and explored as much as we could. One thing though as a photographer; you think about shots in your head before you even get there and it turns out, Paris is pretty busy! Even in October so it was almost impossible to get a shot of them and the tower without hunching down. However, we did what we could given the crowds.

There is so much to capture much like in any huge city, but with available time we hit places they really wanted which also included Parc Monceau and the Arc De Triomphe. We had lunch and head back for the hotel for a rest and then out again for dinner, the golden hour and night time shots at the Eiffel Tower and the Arc De Triomphe.

I’m proud to say that this is my 8th year as a Professional Wedding and Engagement Photographer and that I am now Multi-Award Winning. Prior to this career I was a Web and Graphic Designer. My business is based on friendship, great rapport. I can’t be a wedding photographer without being close to my clients. Some photographers wouldn’t spend as much time as I do with, and for my clients but I love it and I personally don’t think we work well without that rapport.

What I offer is different from most, because a couples experience with me starts with their engagement shoot, and I never cover the same location twice, unless it’s radically different.

Any photographer can cover the same locations that are covered all too often, especially where I live in the Bournemouth area. And I don’t want to be just any photographer. My photography and ethos is different.

The fact that I can be self employed in this day an age and run a successful photography business is a huge blessing, but it also enables me to set out what I want to do as a business and what I can and want to do differently to other photographers. It would get too boring for me to cover the same locations and because it’s an engagement shoot we can literally go anywhere and do anything which means the sky’s the limit with creativity. it also means that if one day is raining, we can simply reschedule to another date, unlike the wedding where we have to deal with whatever the weather does on the day. You could even theme the shoot!

The thinking hopefully becomes outside of the box and maybe near where a couple currently live or further away. The hope is that it could also have meaning to a couples relationship and tell their story too.
The other thing is that we are featuring beaches at your wedding so it would be good to think of something different for your engagement.

One of my most recent engagements was at Heathrow terminal 5 because the couple wanted to go to Southbourne beach, which really hasn’t much there at all to work with.
It was only by chance they mentioned he proposed at Heathrow. They didn’t think much of it or even think of it as an idea but my eyes lit up as the creativity and uniqueness would be amazing and they then totally understood and it was awesome.

I’d rather someone say “wow what a great idea” or “that’s such an unusual place to have an engagement shoot, I would have never have thought of that” rather than a very easy go to location that everyone has their engagement shoot at.
There are a million places we could do the engagement shoot in the South of England or further afield, not just Bournemouth Beach or Lulworth Cove if my client lives in Bournemouth.

The engagement shoot is creative and gets a couple ready for their wedding day by understanding how I shoot, getting used to the camera and us spending more time together. If we don’t click and a couple don’t get me and what I try to achieve it won’t work.

My style is pretty relaxed and unobtrusive as well as very natural. I like vibrant colours, leading lines, and to give dynamics to couples which is why I shoot in the day time, the golden hour, sunset and night time photos.

What did you love about the day?

It was October and we had great light. Not too sunny and not too dark. Pretty perfect. But as you may have read previously I love rapport with my clients. So I had 3 days with Tom and jess and to just be friends and developing trust and confidence in my work means the world.

Great Choice! They are now added to your Favourites.
We use cookies to ensure that we give you the best experience on our website. If you continue to use this site we will assume that you are happy with it.I Accept