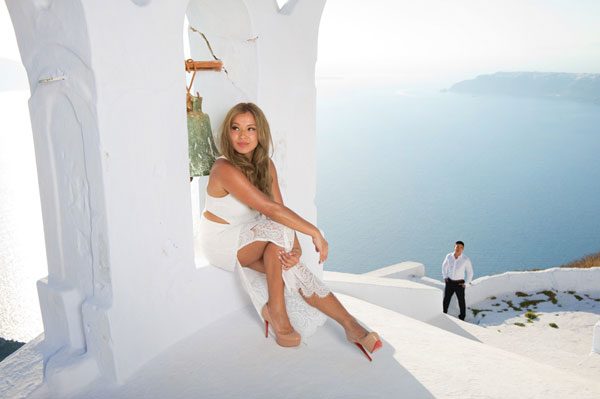 Today we feature some stunning shots of Jonathan and Sammy with one beautiful back drop,  the Aegean Sea and its breathtaking sunset. The shoot was captured by Anastasios Aggelou.

Famed throughout the world for its majestic view of the Aegean Sea and its breathtaking sunset, the island of Santorini is, naturally, a very popular destination for newly wed couples. But Sammy and Jonathan wanted something more than ordinarily romantic photographs in a quaint background. They wanted to be engulfed in the island’s wild beauty, as if they were a part of the scenery itself.

Sammy and Jonathan were married in Australia and came to Santorini for their honey moon. They were a warm, easy going couple, completely in love. However, when it came to their wedding shoot they were adamant about what they had in mind; something modern and “out of the box”, a set of pictures that wouldn’t appear in every other couple’s living room… even if that meant climbing rooftops or wetting those nice wedding clothes…

I always discuss thoroughly with my clients before choosing locations for a shoot. In my experience, there is no point in trying to do something that you are not comfortable with just because you want to do something different. And usually you can’t tell those limits until you find yourself on the spot so we agreed to take it slow. On the day of the shoot, we started with a few simple terrace and street photos. It is amazing how the chemistry and natural affection between two people can light up a place. As time went by, excitement was rising while shoes and jackets were cast aside in order to climb the top of a church, or check the view from a cliff, giving me the change for more artistic, film- styled shots. I found the crown of that day to be its ending, at the Kolubos Beach, an astrophotography of the night sky of Santorini featuring a couple who had completely forgotten this was their wedding shoot but seemed to enjoy they were the only two people left below the stars.

Many thanks to Anastasios Aggelou for sharing this lovely couples shoot, you can find out more about him and view more of his work on his site here.