Wedding Photographers - How have you been affected this year? Take our 2021 Industry Survey here.
Home / Awards & Collections / February 2017 Collection 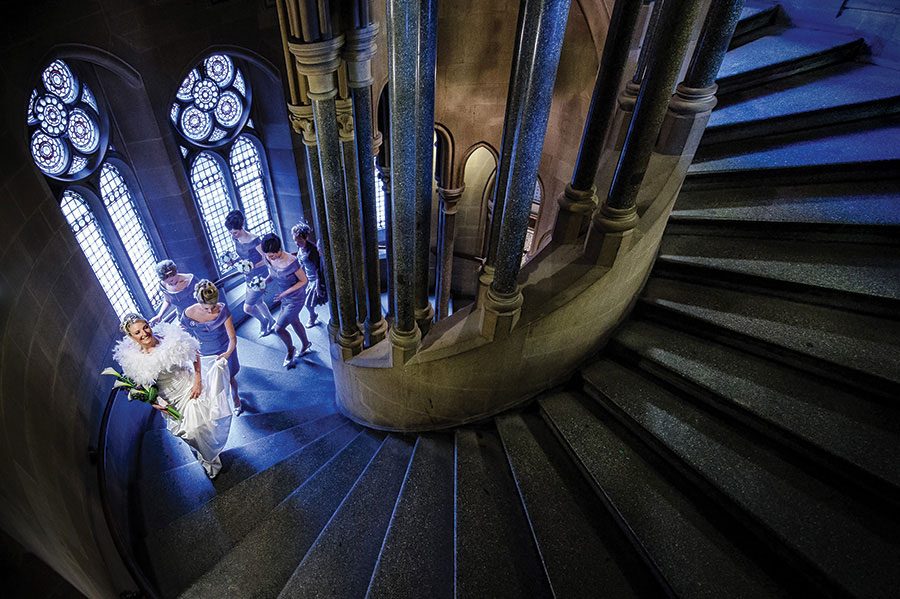 Each month we round up some eye catching wedding photos from some of the top photographers around the world, this month is no exception with some stunning fun, bright and beautiful wedding photos. Well done to all selected. 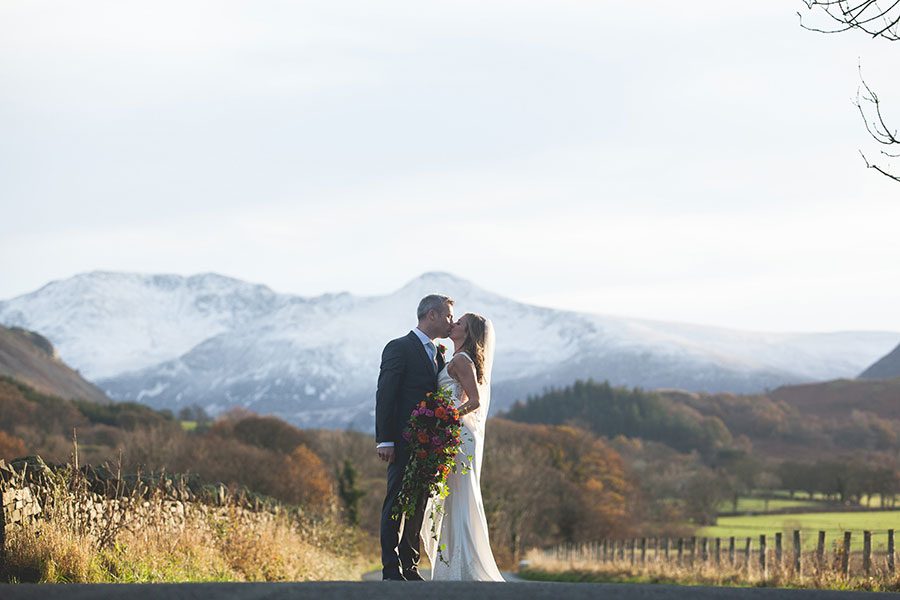 A kiss in Autumn.

Photo by Mr and Mrs W/ Mark williamson – The day before Rhiannon and Mark’s wedding, the weather was about as bad as it gets. The overnight, the wind and rain stopped and was replaced with a crisp Autumn day, accompanied by a dusting of snow on the peaks of the Lakeland hills. I had recced this location for just such a photo and, with 20 minutes of sunshine left, everything fell into place.

Photo by Roberto Schiumerini – Photo taken in August 2016. The surprise for the bridesmaids to see the first time the bride dressed. 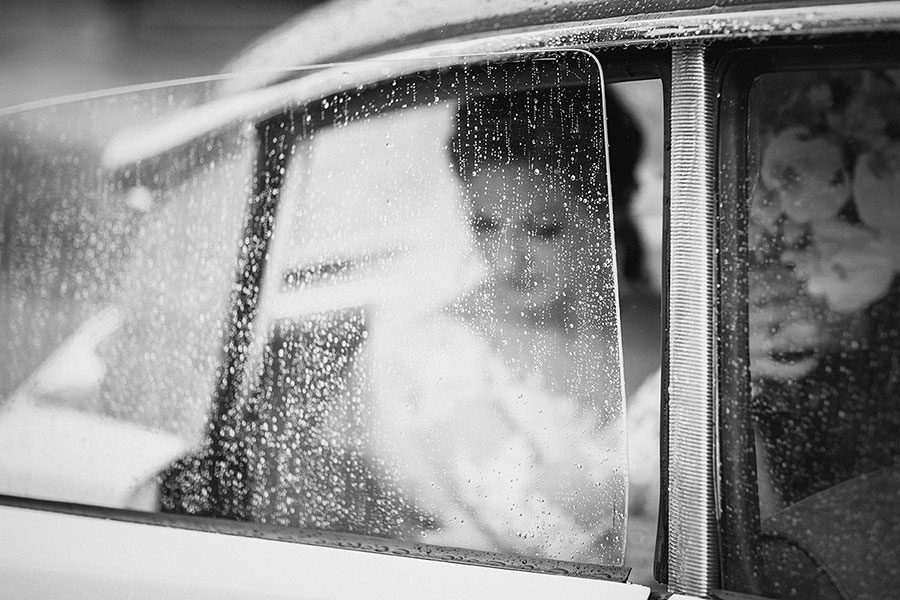 Photo by Magia Obrazu – It was beautiful, atmospheric rainy day. The Bride – Gosia was just getting into the car straight after ceremony and we catched this unique moment with rain drops. 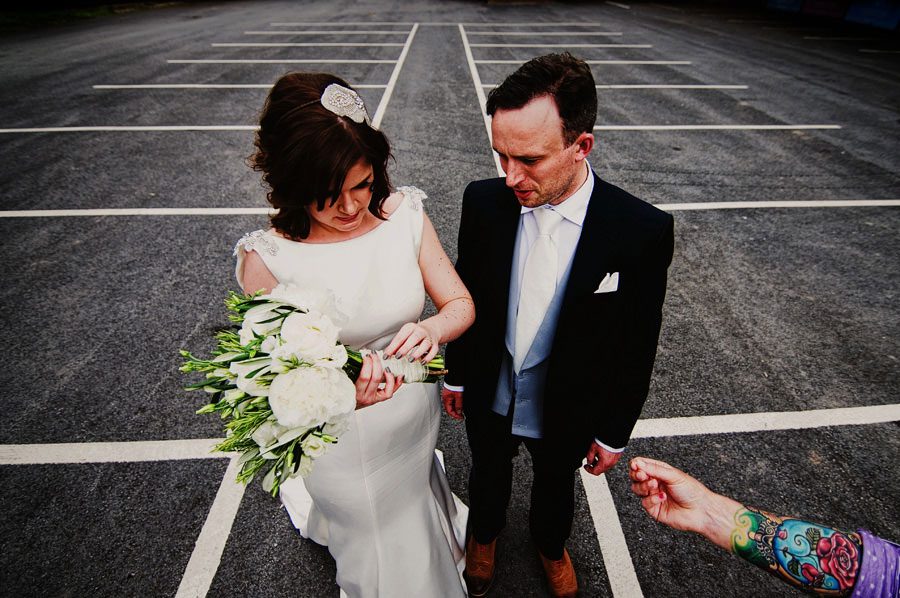 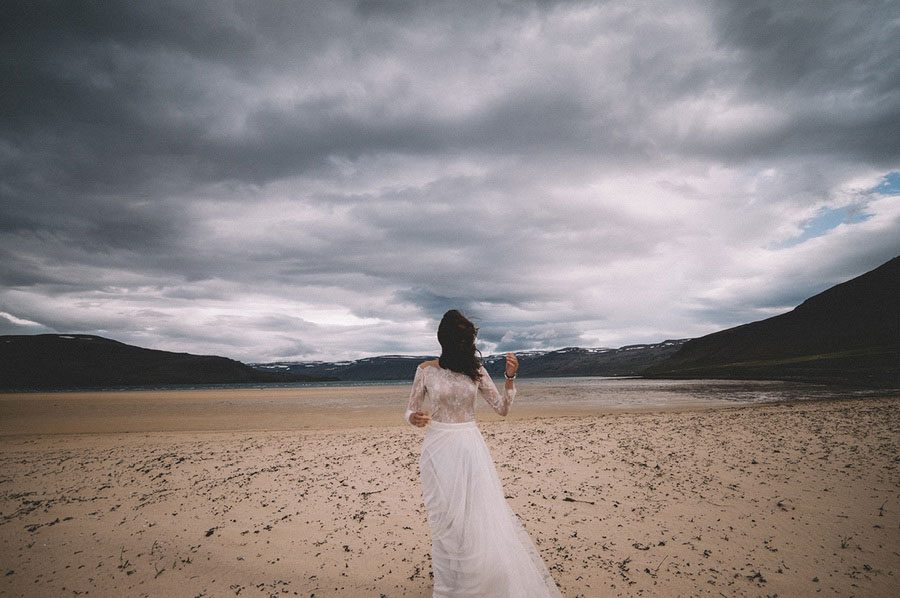 Photo by Zvonimir Kusec – This is my wife! We have to go on some business trip on Iceland and her idea was to take some wedding photos with her. So we bought wedding dress and took this photo. 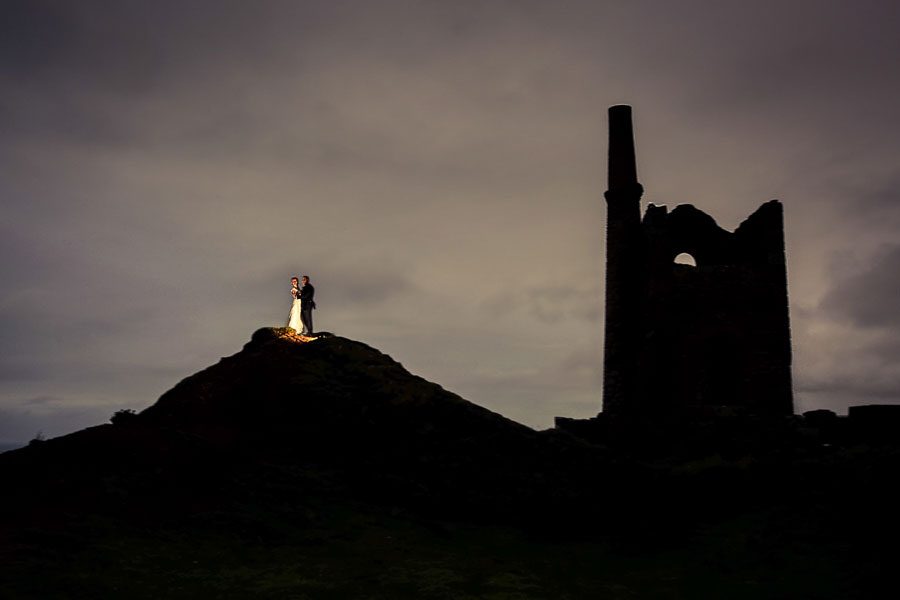 Photo by Thoas Frost Photography – This was taken up next to one of the old tin mines in Cornwall on the North Coast. It was a cold and windy day and this was the last shot of the couple before we went and hid from the storm. I used a small flash on a remote trigger to light up the couple. It was a quick image that i wish we had longer to play with but you cannot stop a storm. 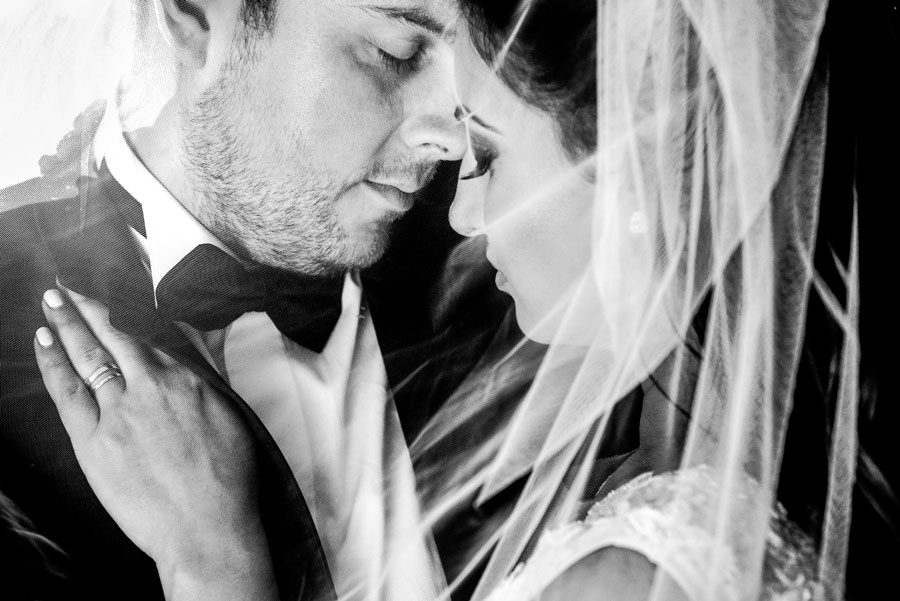 Photo by Andrei Dumitrache – This photo is one of my favourite from the last year and it was taken at the after wedding photo session. I shoot through the bride is veil and i was very close to them. I love it because is about feelings, passion and true love. 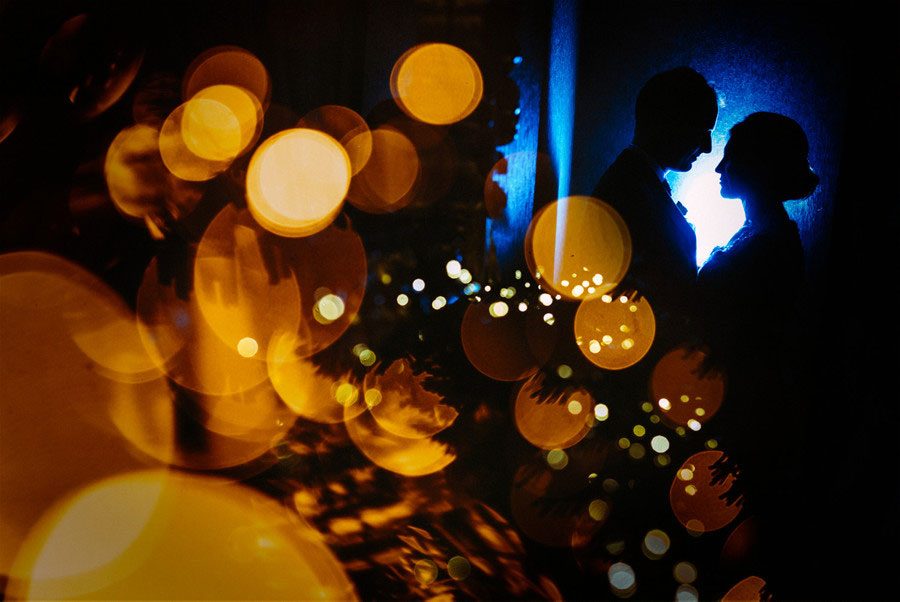 Photo by Andrew Keher Photography – A Christmas tree lent a helping hand (or branch) for this festive bride & groom portrait. I used a blue flash and the natural orange warmth of the fairy lights to create a contrasting silhouette of Donna & Darren a few minutes before the first dance- nothing like the pressure of the band coming out on stage to get the creative juices flowing! 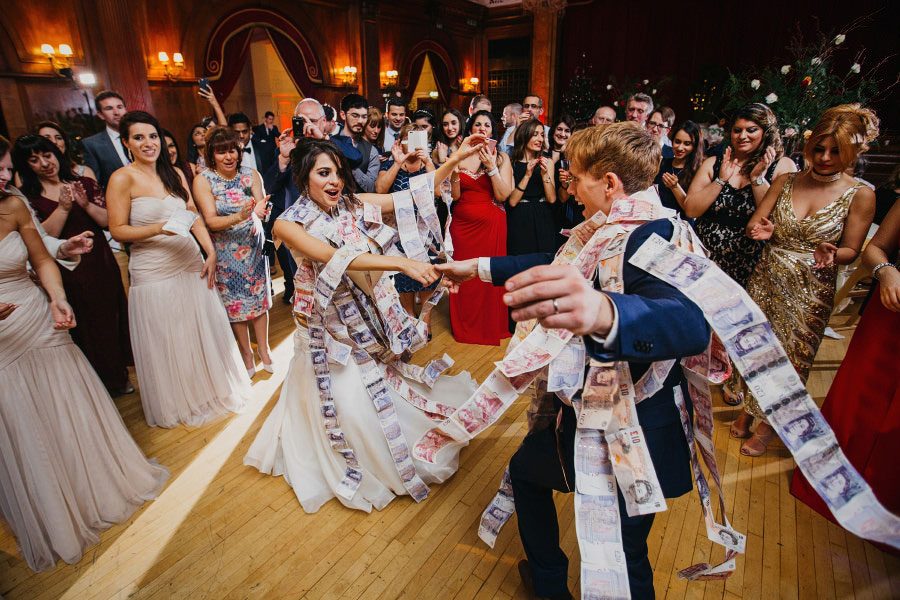 Photo by John Hope Photography – This is a photo from Steph and Rob’s Greek money dance – the traditional way of giving gifts to the newly weds. Amazing to witness! 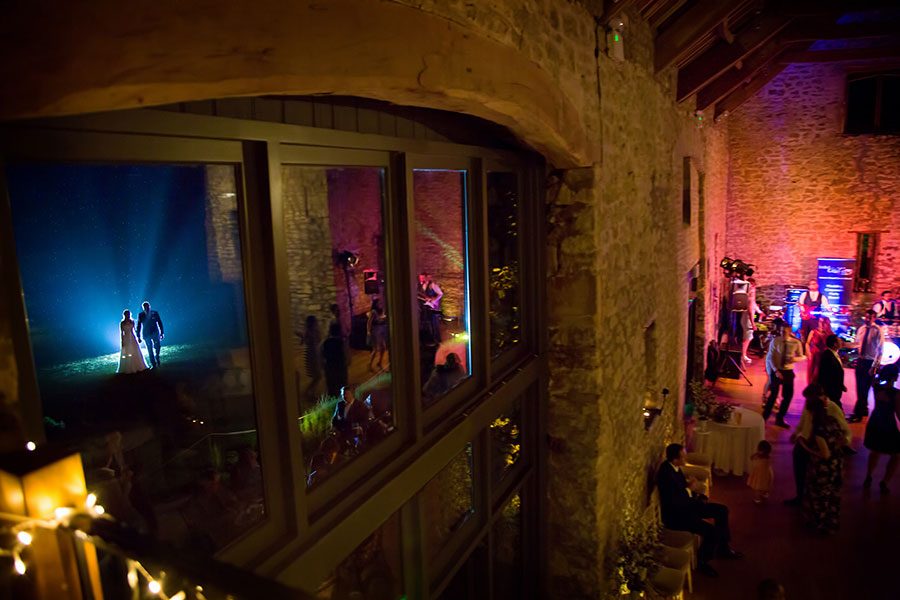 Photo by Martin Dabek Photography – The shoot was taken at Priston Mill, where I photographed quite a lot. This time I wanted to create something different , so I photographed the couple walking outside but from inside the barn. 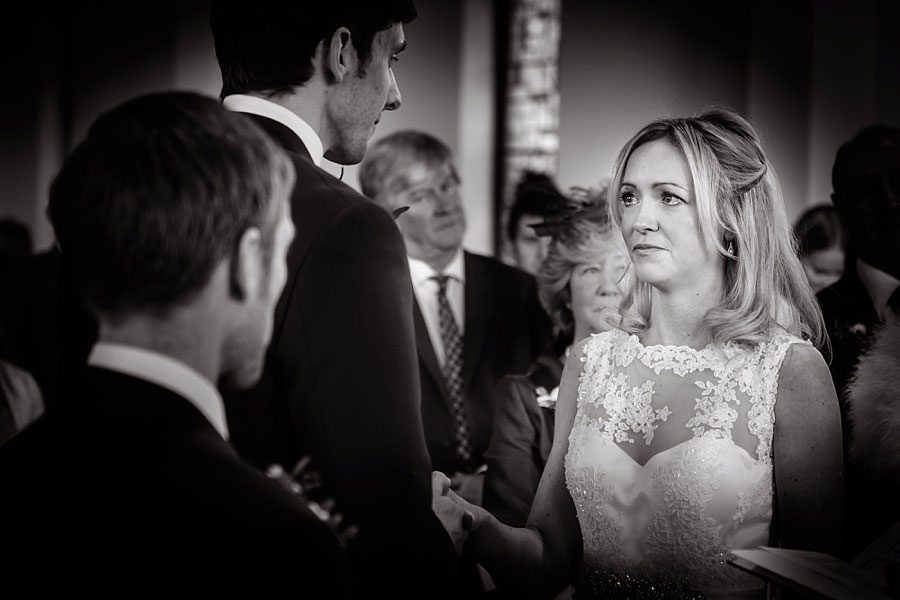 Photo by mick cookson photography – Here’s Rachel, meeting her husband to be Paul at their wedding in Sheffield. Rachel assured me all morning during her preparations that she wasn’t going to be the one to cry – and to keep an eye on Paul. My instincts proved me correct!

Stairway to the stars

Photo by Rob Sanderson Photography – The spiral staircase inside Manchester Town Hall is magnificent. So, I decided to be bold and make the staircase fill the frame. I chose an angle that played with perspective making it like an MC Escher ‘impossible constructions’ graphic painting. The lovely light quality and mix of colours really added to the drama of the image. 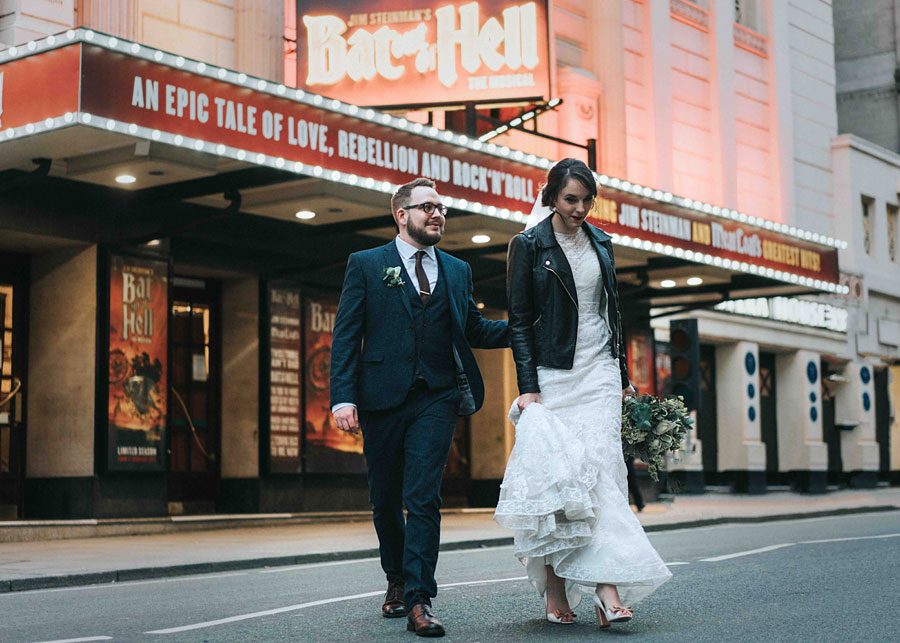 An epic tale of love

Photo by GingerBeard Weddings – I shot a wedding in January with Hannah & Alex. She’s a photographer & he’s a graphic designer. Lovely couple just didn’t like their photo being taken + it was FREEZING for the bridal portraits. 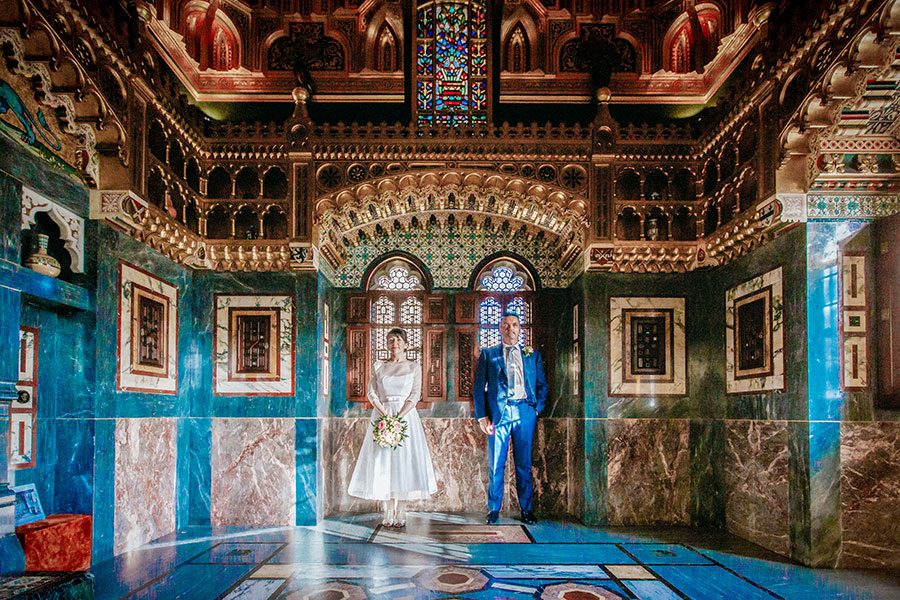 Photo by Art by Design Photography – Steve Wheller – This was taken in the Arab Room at Cardiff Castle in South Wales. We were very honoured to have free reign throughout the castle and photograph in any of the rooms. The arab room is one of the quirky and challenging rooms to shoot in. With all its colours, light and shadows. I wanted to create some symmetry and the sort of Cuckoo clock feeling of the couples coming out of their individual spaces. 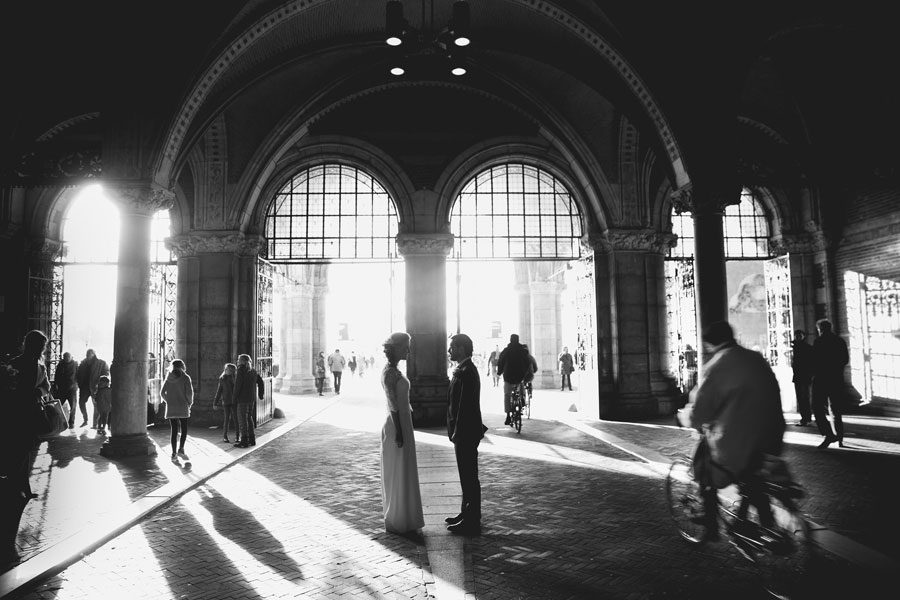 Photo by Khiria – photographer – Taking pictures in Amsterdam is always tricky. I want to put the movement of bikes in there. I made them stand in January the 6th in a freezing afternoon without jackets and let few bikes go around them … 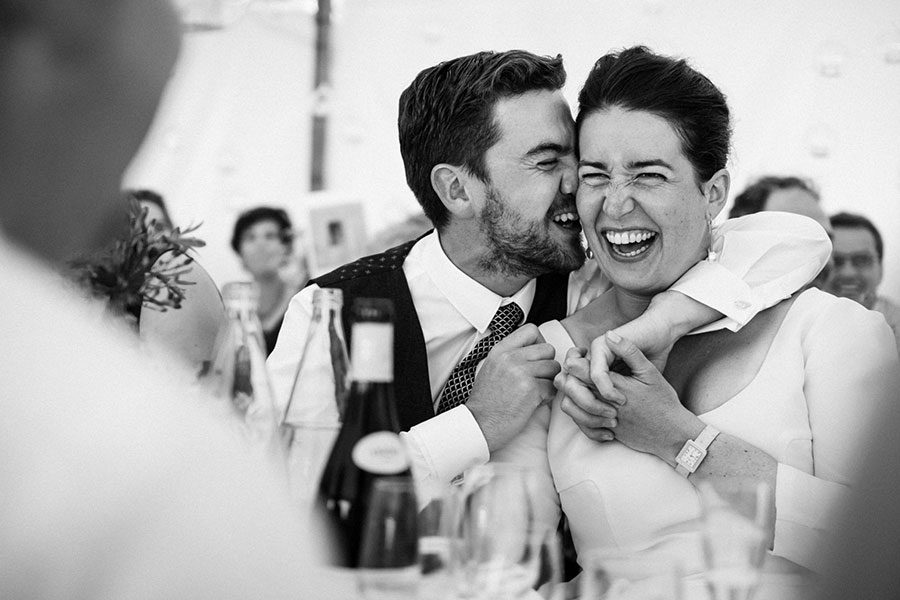 Photo by Adam Riley Photography – The bride and groom can get lost in the moment during the wedding speeches. Astrid and James are hugging and laughing at the best mans speech, oblivious to my presence. Taken in France. 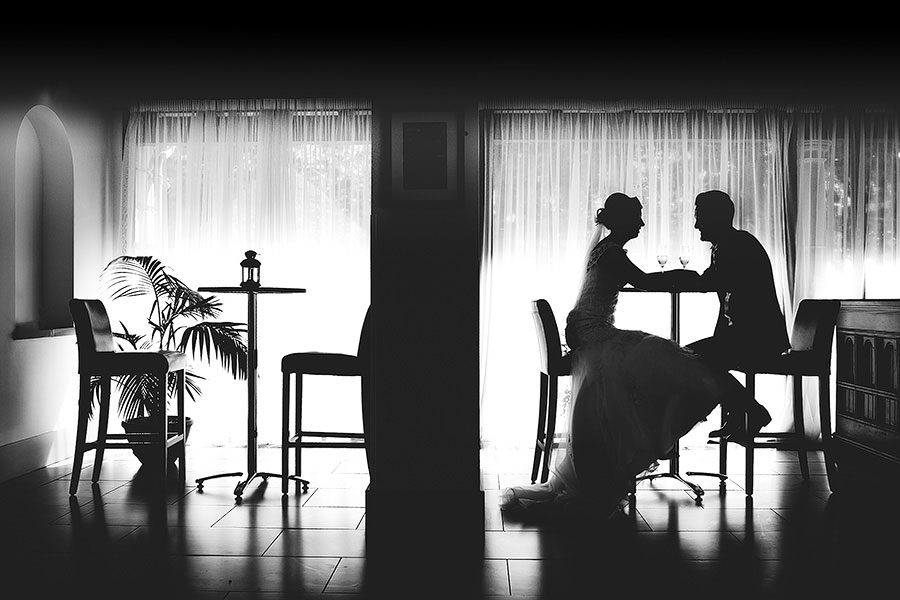 Photo by Nick Rutter Photography – I am a creative wedding photographer so I am always looking for shapes, shadows, highlights and shooting each wedding differently – especially at the same venue. To be able to achieve what I look for, it takes the right conditions to make it happen. Where I used to be scared of harsh sunlight, I now use it to my advantage.

I have walked past this bar area at The Italian Villa in Poole, Dorset, literally hundreds of times, yet it never crossed my mind to shoot there until I noticed how bright the sun was shining through the thin white curtains to great a silhouette. Like most wedding photography, it’s not perfect, but it’s one of my favourites from 2016. 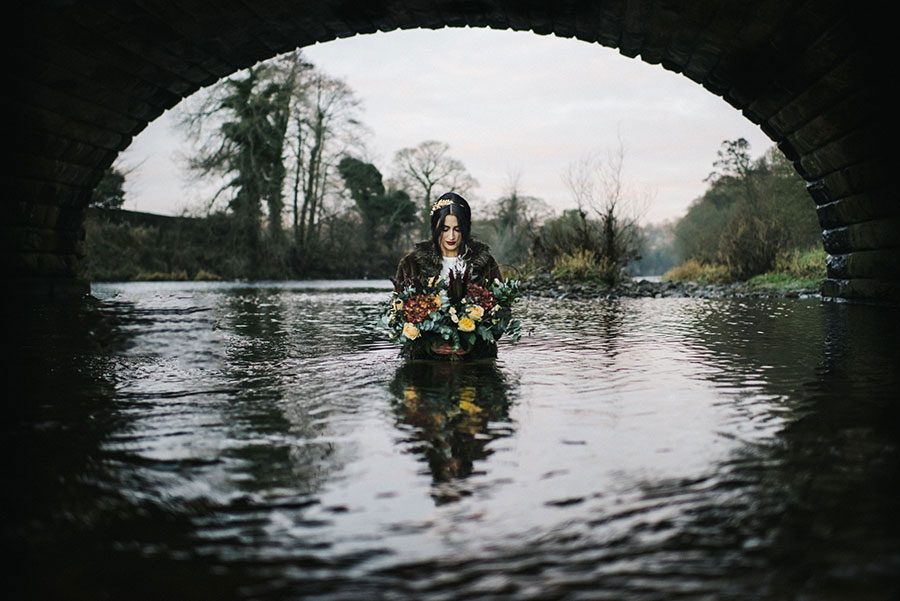 Photo by Kerry Woods Photography – Working with local suppliers in the Ribble Valley I put together a styled bridal shoot last November to showcase the beauty of a winter wedding. I wanted the images to be different to other styled shoot’s and for them to stand out, so I decided to photograph our very brave model Rebecca in the water. It was a tad cold but certainly had the desired effect. 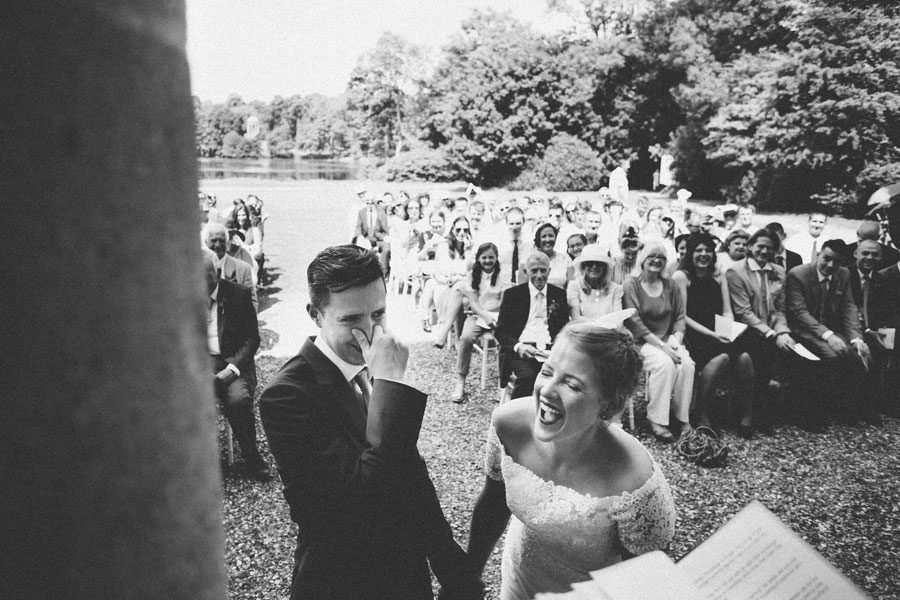 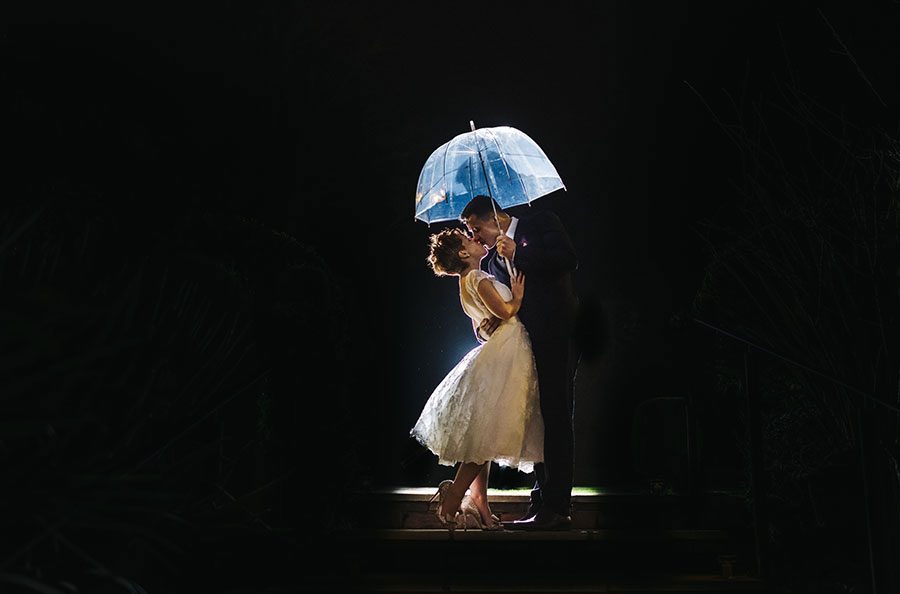 Photo by Kerry Woods Photography – Katie & Janio were married at The Alderley Edge Hotel in early February. Having a 4pm ceremony meant that natural light would be limited so I decided to get a little creative with some off camera flash shots. I love the romance that this image exudes. I don’t think it would have worked half as well if Katie hadn’t chosen to wear a cute 50’s style tea length dress. 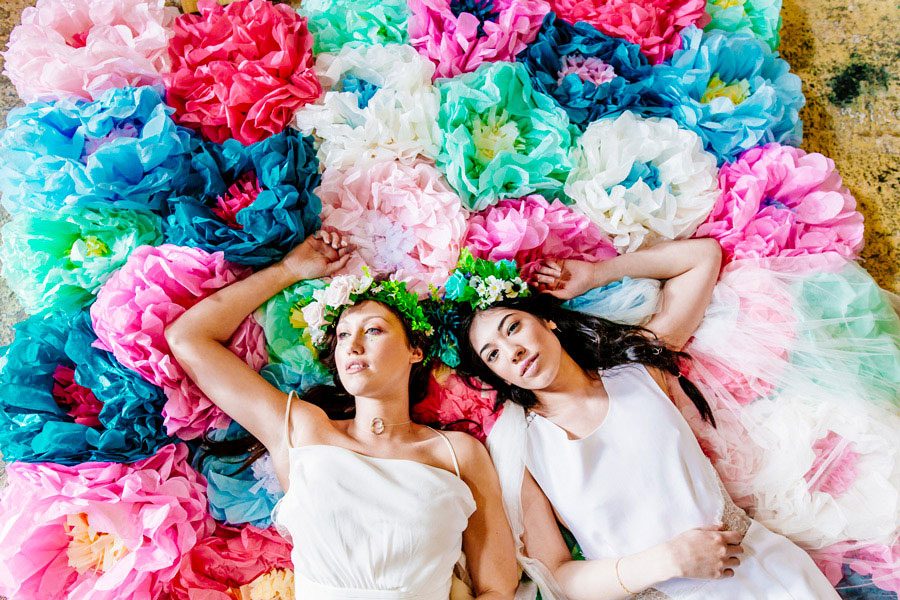 Photo by ELS Photography – This image was shot at Asylum Chapel Peckham one of my favourite buildings in London.

Photo by Sharron Gibson Photographer – This was taken at The Elvetham Hotel in Hampshire in February. It was cold and the rain was just about to come in. I was worried I wouldn’t get enough definition in the fireworks – but I really like this one. 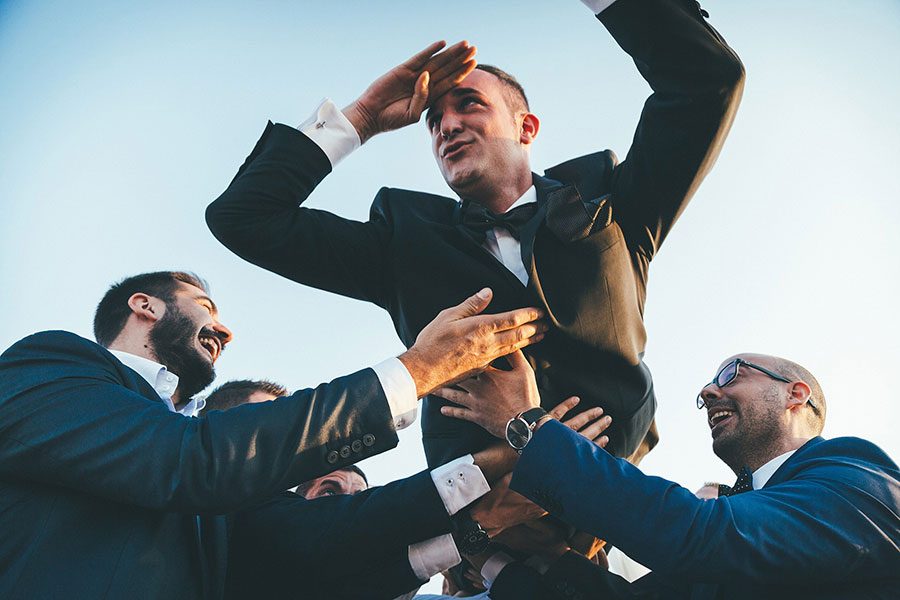 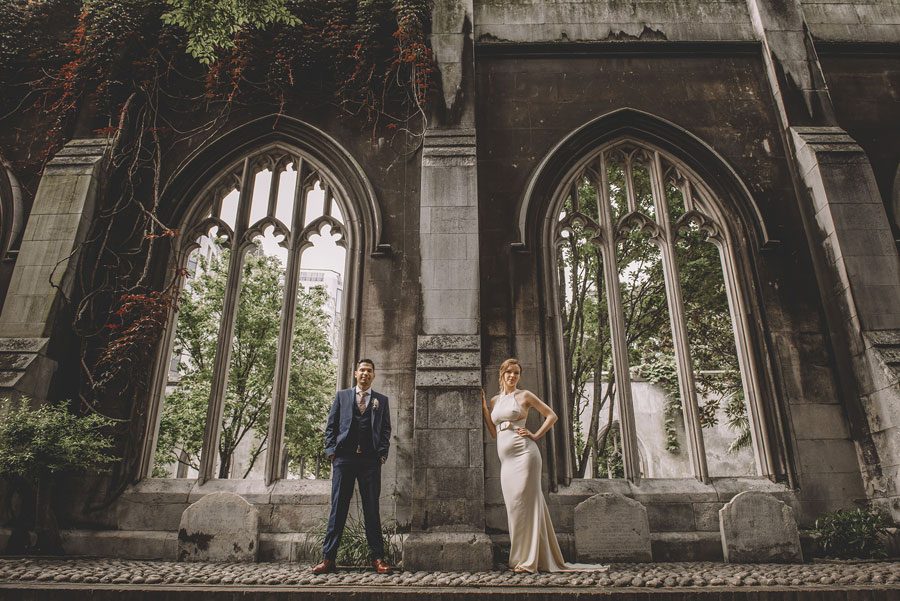 Photo by Emma-Jane Photography – Gosia and Conrad wanted to go all round london for their couple shots, which was not possible on the actually wedding day between ceremony and dinner as there was not enough time. So we organised the wedding as a two day split, where they got dressed up again to go around London for their couple shots. one of my favourite weddings of last year. 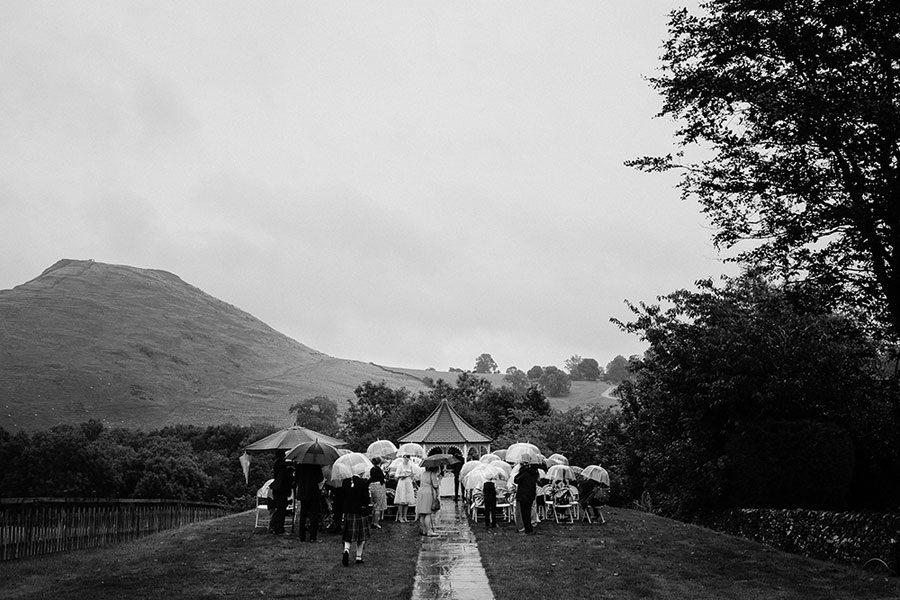 A rainy day in the Peak District

Photo by Simon Dewey Photography – The couple had decided to get married at the Isaac Walton hotel in front of Thorpe Cloud in the peak district. It was a rainy September day but they decided to equip everyone with umbrellas and follow through with their plans. I love the atmosphere of this image – and my eye always goes straight to the lady looking back at us. 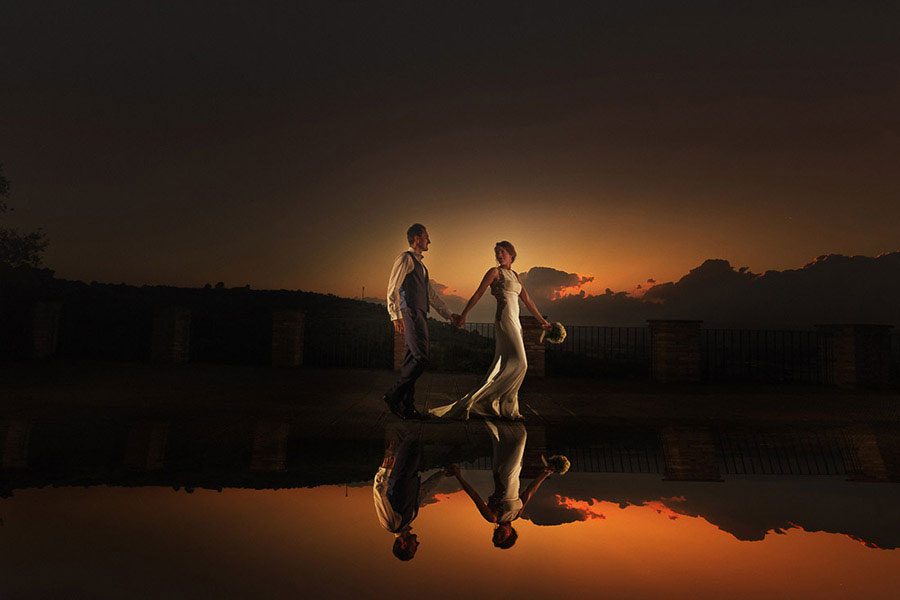 Photo by Rellini art studio/ Maurizio Rellini – We took this photo at Rosciano castle near Assisi while the dinner was served. We went to the main courtyard where I used wireless lights and a small mirror to reflect the couple. 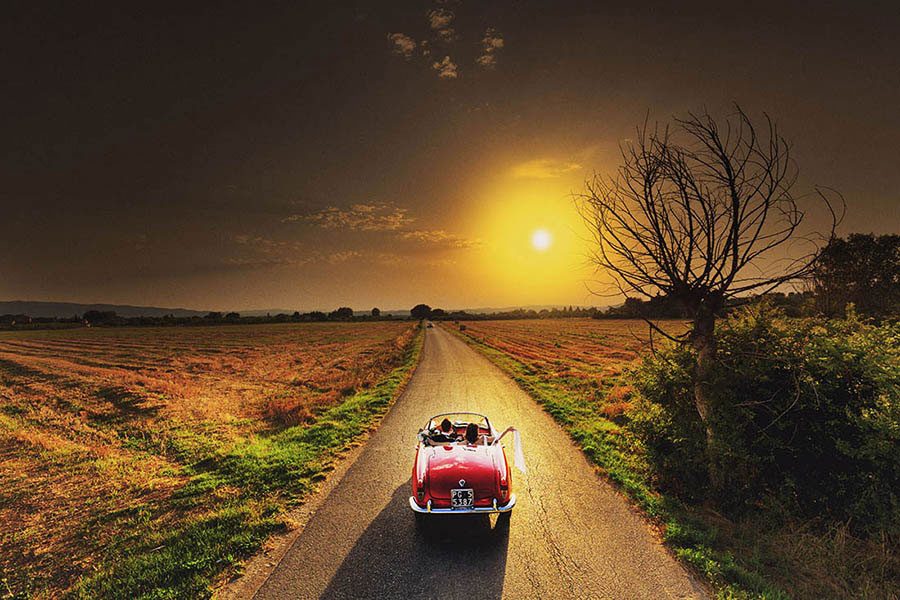 Photo by Rellini art studio / Maurizio Rellini – James & Giulia on their destination wedding to Italy. This photo was taken after the civil ceremony at Rosciano Castle near Perugia while they were enjoying an old car ride near Assisi village.