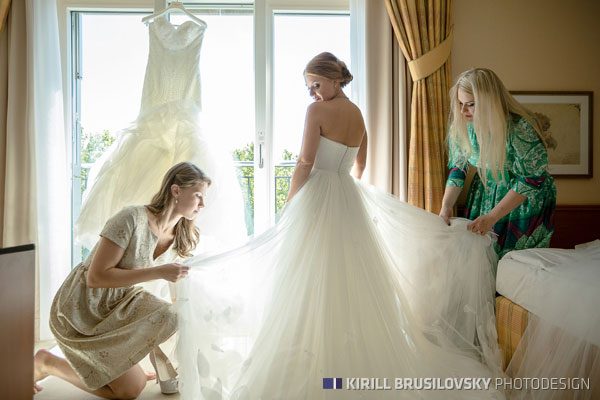 Today we are pleased to feature the wedding of Alex and Svetlana who got married last summer and had their perfect day captured by International wedding photographer Kirill Brusilovsky.

“Kirill Brusilovsky is an award-winning international photographer, based in Hamburg, Germany. He is photographing weddings since 2006 and his work is periodically featured in wedding magazines and portals.”

The wedding
Alex and Svetlana are a beautiful young couple of Russian origin, living in Hamburg. As perfectionists, they have hired a wedding planner (which is yet quite exceptional for Germany) and have demanded the very best of everything. The planner has suggested one of the most beautiful wedding locations, most prominent florists, a great band and a list of wedding photographers. The suggested photographers were initially denied by the couple – Kirill was a second try, which matched perfectly.

Luckily the weather was great (which is not obvious for Hamburg even in summer), so the ceremony could take place, as initially planned, outside of the villa. Hamburg is a maritime city and it was Svetlana’s and Alex’ wish to make some portrait shots near water. Alex was quite relaxed and Svetlana has enjoyed posing for the camera. There have been a lot of young guests, so the atmosphere was great and the party was very lively and fun.

The wedding was quite challenging to photograph not only because of the couples high demands and expectations. There has been also a video team, so the time for portraits had to be shared. Since the photographer and video team had already been working together, they could work hand in hand – in the end the pictures and the video have enhanced each other greatly.

Photography style
Most of the day I am in a photojournalist mode, trying to capture spontaneous and candid moments. I try to establish the connection with the people very quickly, take away their fear of the camera and let them behave naturally without paying much attention to the camera. However staged portraits are also very important to me. I like portraits on which bride couple looks gorgeous. I want the pictures to have a little touch of Hollywood, which is quite challenging, because I have to make ordinary people who are neither models nor actors to imagine and to believe that they are stars and it works only if I manage to make them completely relaxed. Most of the pictures I take are in color, which I control and set carefully during the post-production.

Great Choice! They are now added to your Favourites.
We use cookies to ensure that we give you the best experience on our website. If you continue to use this site we will assume that you are happy with it.I Accept